'Goldilocks' is giving way to stronger US growth and potential inflation concerns, with Congress fanning the overheating economy with even more fiscal stimulus. This is likely to prove a textbook example of a political business cycle.

As UK Chancellor, Gordon Brown infamously promised to put an end to boom and bust. In contrast, President Donald Trump and Congress seem to be eagerly embracing the mantra (or at least the boom part). The US is already growing at around double the pace we view as sustainable (1½%) and this is before the aggressive fiscal stimulus takes effect.

Some economists were enthusiastic about the tax cuts (although I wasn't), as they argued it could help the supply side of the economic equation. However, there has been more widespread concern from the economics community about the second round of fiscal stimulus, as this involves a surprisingly large $400 billion increase in Federal spending across many areas over the next couple of years.

Given that the multipliers on direct government spending tend to be higher than tax cuts, the growth boost (at least in the near term) could be even greater than from the tax cuts. However, it does little for the supply side, and the policy is therefore likely to be inflationary. The market is beginning to recognise this risk and has been raising its expected path for Federal Reserve interest rates. 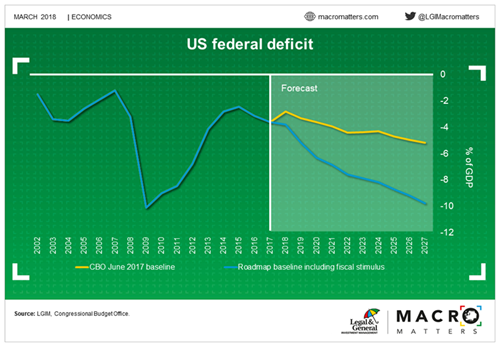 Senator Rand Paul attempted to filibuster the spending bill, much to the disdain of his colleagues (as it only delayed the inevitable), but he had a good point in claiming it is hypocritical of Republicans to pass deficit spending under President Trump after “howling to high heaven” about the same practice under President Obama. As a result, the deficit is now on course for the worst case scenario I outlined in ‘Phenomenal’.

There have been several years of austerity, with sequestration (government spending caps) squeezing discretionary spending at a time of sluggish growth and still relatively high unemployment. Congress has now decided to reverse all the hard work, just as the economy has reached full employment.

As a result, the US is heading for a budget deficit of more than $1 trillion (5% of GDP) at what we believe is likely to be the top of the cycle in 2019. Furthermore, the longer-term structural challenges (with mandatory spending set to rise due to escalating healthcare costs from an ageing population) argue for running budget surpluses today.

Congress also seems to be forgetting about debt dynamics. Exceptionally low interest rates have allowed the US to run a primary deficit without the overall budget deficit entering an explosive path. Not only does the fiscal stimulus add to public sector debt and therefore the interest costs on that debt, but the unnecessary boost to aggregate demand could push up interest rates faster than would have been the case otherwise. The average maturity of the debt is currently around six years, so it will take a while for this to become apparent, but even without any further rise in forward rates, debt servicing costs are set to triple over the next decade.

The FOMC meeting on March 21 will give the Fed (under new chair Jerome Powell) a chance to reflect on recent developments. As discussed in ‘Is a US recession looming?’, the Fed is unlikely to express any concern around the rogue January inflation print. Indeed, the rise in inflation and inflation expectations back up towards mandate consistent levels is probably welcome. This should allow the Fed to signal that policy normalisation will likely continue at a gradual pace.

Still, as the market has converged towards the Fed’s dots, participants are likely to feel inclined to nudge up their rate forecasts to mitigate the risks around introducing a large fiscal stimulus in an economy already at full employment.