Fool in the shower

Congress has passed a surprisingly powerful fiscal stimulus which markets appear to be underestimating. Strong growth might be cheered initially, but given that the US economy is already operating at full capacity, it risks overheating.

The fool in the shower is a term that was coined by Milton Friedman. His policy prescription maintained that any stimulus to the economy should be done slowly because it takes time to determine the effects of the change. He compared the situation to a fool getting into a cold shower before the water has had time to warm up. Rather than waiting for the temperature to adjust, the fool turns the hot water all the way up and eventually scalds himself.

"We don't believe the US economy requires any additional stimulus"

The US economy is already warming up nicely and is likely to have finished 2017 with a third consecutive quarter of around 3% growth (annualised). We therefore don't believe that it requires any additional stimulus. I wrote about the dangers of a fiscal stimulus at this relatively late stage of the economic cycle a year ago in overstimulated. Furthermore, there are now several aspects making the tax cut and reform package passed by Congress a more potent near-term stimulus than we had expected. It is certainly larger than implied by the just-under $1.5tr static cost over the 10-year budget window:

"Overall GDP growth is now likely to be close to 3%. This is almost double the rate of our estimate of potential growth"

In terms of the growth impact, we now assume that it will add around 0.5% to growth in 2018, with overall GDP growth now likely to be close to 3%. This is almost double the rate of our estimate of potential growth. We also see some further boost to growth in 2019. The risks to this view are probably to the upside, as we have assumed a low multiplier on business investment. There is also a reasonable chance of a bipartisan agreement to boost federal spending next year across both defence and other discretionary items. 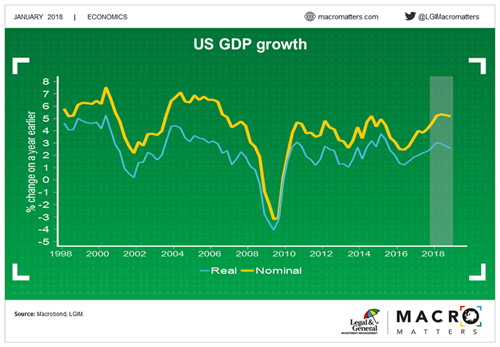 The severe long-run budget impact remains as I laid out in Phenomenal. In the end, Congress has opted for a larger deficit in the optimistic hope that fiscal reform will raise productivity to help ultimately pay for the tax cuts.

"A recession at the end of the decade is a growing risk, but if the Fed succumbs to political pressure to let the economy boom, the bust could be even more spectacular"

How will the Fed respond? At the December FOMC, the Fed raised its growth estimates for 2018 and cut its unemployment forecast, but left the inflation and interest rate forecasts largely the same. This is inconsistent with the lack of movement on its long-run estimates for growth and unemployment. Either the Fed needs to revise up its view on potential growth and lower the equilibrium unemployment rate (ie. forecast a better growth and inflation mix) or the Fed should acknowledge it is targeting a more aggressive overheating of the economy to raise inflation. Political considerations could have held the Fed back, but soon Powell will be in the Chair and there is now clarity around the fiscal measures. So by the March FOMC the Fed should be able to present a more hawkish message and edge its interest rate forecasts higher. A recession at the end of the decade is a growing risk, but if the Fed succumbs to political pressure to let the economy boom, the bust could be even more spectacular.