President Trump has said his tax plan is ‘phenomenal’. We agree, but only due to the exceptional damage it could inflict on US public finances

We are still awaiting further details of President Trump’s tax plans, but whatever is announced, this is just the start of the negotiations between the White House, the Committee on Ways and Means and the rest of Congress. The final version could look quite different. As previously discussed, the timing of any fiscal stimulus is poor with the US economy already operating around full capacity. In this post we look at the potential implications for US public finances.

In Chair Yellen’s recent Congressional testimony, she stated that the US fiscal trajectory is not sustainable and advised policymakers to take remedial action. Without being drawn into the specifics, this was a not-so-subtle critique of the proposed plans, although she did mention that some elements could be beneficial for productivity. The US is currently running a Federal budget deficit of around 3% of GDP. Under the Congressional Budget Office’s own baseline projections, which are underpinned by a generous assumption of perpetual 2% growth and some expiry of existing provisions (which will likely be extended), the deficit is set to rise gradually over the next few years. This is mainly driven by the rise in non-discretionary spending, especially healthcare costs and social security, linked to the ageing population.

Trump’s $5 trillion campaign plan, if fully implemented, would likely blow the deficit out towards double-digits over the next ten years. Since we don’t expect it do much for the supply-side of the economy (we see potential growth at 1.5%), it just adds to the debt. This is compounded by the higher interest rates caused by the fiscal stimulus and the escalation in debt-servicing costs. Even under our more modest assumption of what is likely to signed into law (as outlined in 'Overstimulated'), the deficit and debt would still be on an explosive path. 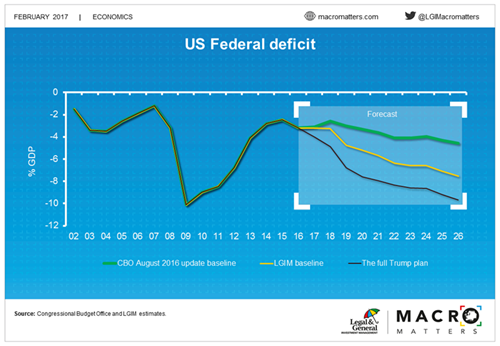 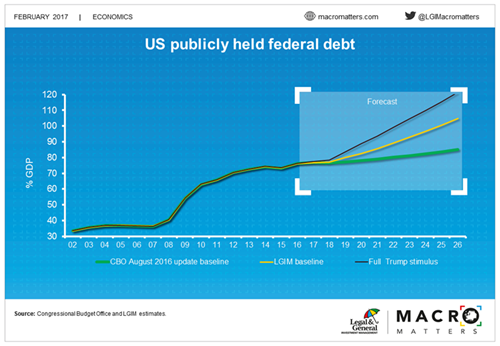 What about the fiscal conservatives in the House and the desire to make the fiscal changes revenue neutral? There is likely to be a large gap between the claimed impact on the deficit and the eventual reality. This gap could be bridged by various fudges necessary for the package to pass Congress. First is the use of the current policy baseline, which ignores the expiring tax breaks built into the CBO projections. This amounts to a cost of around $400bn. Second is the assumed repeal of the tax increases associated as part of the Affordable Care Act. These include the 3.8% tax on net investment income, the additional 0.9% payroll tax, the medical device tax and the health insurance tax. Third and most egregious of all, is the aggressive use of dynamic scoring.

The House plan assumes the tax cuts and full expensing of capital investments raise potential growth by a full one percentage point a year, for each of the next 10 years. This faster growth generates additional revenues to pay for the tax cuts. Finally, the House plan assumes that the controversial Border Tax Adjustment will raise around $1 trillion. The revenues from the import tariff more than offset the costs of the export subsidies because the US runs a large trade deficit. However, we think this tax has a low probability of passing Congress because it is highly likely to contravene WTO rules and prove unpopular in the Senate as it raises prices for consumer via higher import costs. This might lead to either scaled back tax cuts or an acceptance of larger deficits.

Overall we see a high chance of a fiscally irresponsible stimulus at some stage this year. The investment implications of aiming for rapid growth were set out by Chris in a recent post. Ultimately, it could be the bust which proves to be ‘phenomenal’.