Trump is promising fiscal candy and markets seem to be on a sugar high. Will this end in tears?

We’ve had a few weeks to assess the impact of Trump’s potential policies on the US economy. So far both business and consumer confidence have responded favourably. There is still no clarity on the scale and timing of the fiscal stimulus, but we can say something about the multipliers (i.e. the impact on growth from each dollar of tax cut or spending increase) and run some scenarios.

For tax cuts, the multiplier is typically lower for higher earners as they tend to have a reduced marginal propensity to consume compared to poorer households. Corporate tax cuts usually have very low multipliers because the boost to profits often goes towards less debt issuance, share buybacks and increased dividends, and only at the margin higher investment. Government spending increases have higher multiplier, especially well targeted infrastructure projects, though the lags to growth are longer.

We have run two scenarios. The first is the LGIM baseline which assumes $100bn of corporate tax cuts, $100bn of individual tax cuts and no net increase in government spending (this equates to $2tr over the next decade). The impact is spread evenly over a year, starting summer 2017. The second is effectively Trump’s proposal where we plug in double the tax cuts and $100bn of spending increases ($5tr over the next decade). It is far from clear whether Trump will be able to get even the LGIM baseline amount through Congress since Senate and House leaders appear to favour revenue neutral tax reform. But there is a good chance there will be at least some tax cuts by using dynamic scoring. This incorporates a revenue uplift from fiscally induced faster growth. I believe this approach is totally bogus as explained below, but will be used to weasel a compromise.

The size of the multiplier will also depend on the cyclical position of the economy. If the economy is already operating at full capacity, then unless the stimulus is targeted in a way to boost productivity growth, it will merely lead to excess demand, higher inflation and eventually tighter monetary policy. So there is no long-run increase in output. Instead, the economy is just left with a higher budget deficit.

Measuring how much spare capacity is left in the economy is difficult in real time. Looking backwards we can have some idea by observing subsequent developments in inflation and the economy. We find the Congressional Budget Office estimate of slack of between 1-2% in 2014 to be reasonable. But going forward we differ. Drawing on our analysis and recent {blogs} by James we find potential growth in the US is only around 1.5%. This is more pessimistic than the CBO assumption of 2% (which is also the consensus) and means that despite what appears to have been a somewhat lacklustre expansion since 2014, the output gap has now closed.

If we overlay the two fiscal scenarios on top of the underlying growth momentum {see Economics trumps politics} we find the US is set to grow above potential over the next couple of years. This leads to a positive output gap developing in 2018 of +1% under the LGIM baseline and over +2% if the full Trump stimulus is passed. At this point the Fed could have to engineer a period of below trend growth to prevent inflation from overshooting its target further. In practice, the economy is unlikely to smoothly return to equilibrium. In other words, the bigger the fiscal stimulus, the larger the 2019 recession. 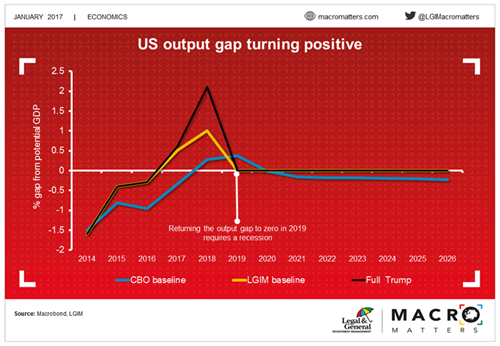