The Peak of Man (Utd)

Just as footballers peak with age, US trend growth has been dragged down by babyboomers stagnating as they enter their 50s. An ageing population means the US economy, like Man Utd, is ‘Wayning’, with its best days behind it.

What is the peak age for a footballer? According to some great number crunching by statsbomb.com, forwards peak at age 25. This might explain why Man Utd are struggling with their ageing talismans Rooney and Ibrahimovic who are 31 and 35 years old respectively, while Liverpool are enjoying great success with a trio of prime-aged forwards (Firminho 25, Coutinho 24, Mané 24).

I cite these two examples as I’m a Liverpool fan while Justin loves Man Utd, so it’s been great fun winding him up on our marketing trips this season! 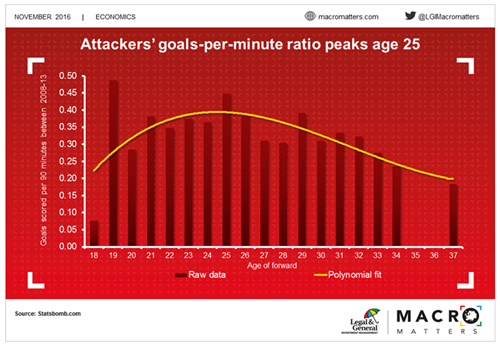 It’s not just footballers who peak with age, we all do. Academic research suggests our physical characteristics top out in our mid 20s while our mental attributes peak a decade later. This is reflected in the amount of money we earn as we age (according to a brilliant blog piece by the New York Fed).

Real wages (and broadly speaking productivity) rise rapidly in our 20s, before slowing in our late 30s and then stagnating/declining as we head into our late 40s. 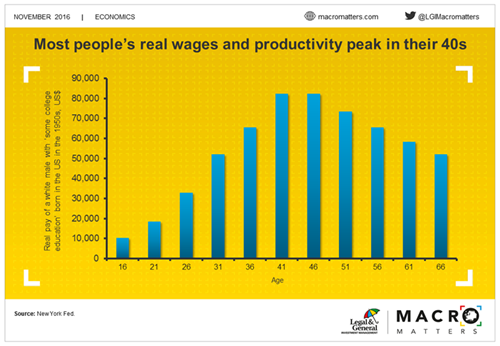 Why does this matter? Because it partly explains why US trend growth has probably halved to 1½%. Not only does an ageing population mean we’re running out of workers (see Donald’s Demographic Difficulties), but it is also a drag on productivity.

The peak birth rate (baby boomers) was in the late 1950s. So the average level of productivity would have been dragged down in the 1970s as these inexperienced school leavers entered the labour force. But aggregate productivity would have been lifted in the 1980s and 1990s as they matured. Unfortunately, these workers are now in their 50s and like Wayne Rooney (and hopefully Man Utd as a whole), past their prime. 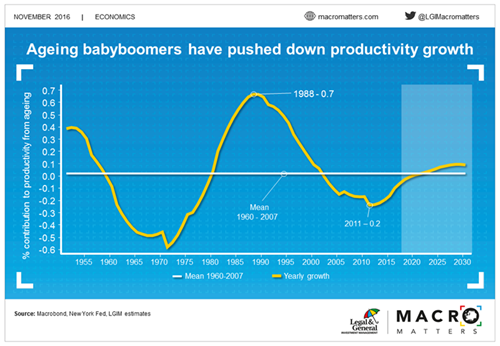 We estimate a peak-to-trough drag on productivity growth of 0.9% between 1988 and 2011 due to ageing. For more details, please see the full article “When I’m 64”. This is the second blog post based on that report and the next one will look at the amount of slack in the labour force.