Is a US recession looming?

Last week saw the largest monthly rise in core US inflation since March 2005. Does this mean the sun is setting on this economic cycle?

No sooner than investor bullishness had reached its highest levels for almost eight years, with the economic cycle appearing to progress smoothly, two important pieces of US data came along and spoiled the ride.

First, there was the expected road bump of a surprise wage jump in the January payrolls. While this might appear at first glance to be good news, it’s often viewed as a leading indicator for higher inflation. This in turn can herald an overheating economy and the beginning of the end for the cycle.

Next, investors' worst fears of further obstacles down the road were seemingly confirmed last week by data showing that core US inflation rose in January at its fastest monthly rate for 13 years. So is the sun imminently about to set on this US economic cycle?

We don’t think so. Market narratives tend to swing more violently than underlying fundamentals. It was less than a year ago that inflation appeared to be undershooting consensus expectations. Just as our Head of Economics Tim Drayson argued at the time, this likely reflected some transitory factors.

Today, the erratic swings seem to be operating in the opposite direction with one-off factors such as clothing price increases influencing the monthly data. In addition, our recession indicators aren’t flagging much immediate danger.

However, while the probability of recession in 2018 appears low, the US is now probably entering the later stages of the economic cycle. As shown in the heat map below, all the signs are that growth should be fine for now (see the 2018 column) but we would expect our recession indicators to start flashing red this year as we see more compelling evidence of overheating and economic imbalances developing (see the 2019 column). 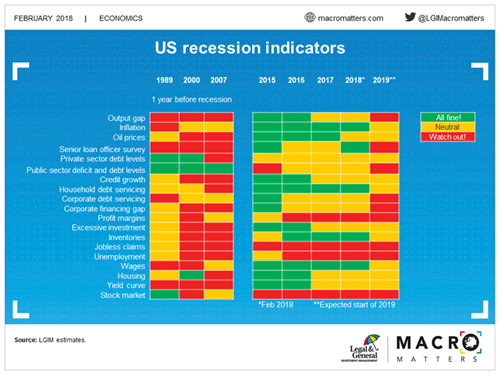 Looking further into the future, however, we do think that US inflationary pressures will continue to build, aided by a tightening labour market, strong growth, high resource ultilisation and rising import price pressures. The ill-timed fiscal stimulus (both tax cuts and spending increases) adds to the reflationary backdrop, albeit it is likely to take a few quarters to fully impact the economy.

So while we are inclined to lean against the recent falls in risky asset classes for now, we also need to be aware of the fact that markets tend to start anticipating a recession 6 to 12 months before it actually happens.

To help offset some of this risk from an investment perspective in the meantime, we favour exposure to US inflation risk protection in the form of US Treasury-Inflation-Protected-Securities (TIPS).

So is the sun setting on the current economic cycle? Not yet, in our view. But investors looking to carry on riding deep into dusk might wish to check their brakes.