Markets are volatile but we are steady in our ‘prepare, don’t predict’ approach.

Coming into 2020, we resisted fully embracing the market’s bullish attitude. In part, this was because we were sceptical of the consensus view that macro risks would be limited this year.

We were concerned that any number of these risks – we wrote about the US election, the trade war, and Brexit negotiations in our outlook for the first quarter – had been under-priced by the market. One risk that nobody saw coming was Covid-19.

Towards the end of January, though, we recognised the potential for the coronavirus to escalate and materially impact the economy in China and beyond. Our first thoughts are of course with all those affected by this illness, but we also have a responsibility to our clients to think about the financial implications of this tragic outbreak.

The challenge is that the level of uncertainty around the virus is extremely high, so it cannot be evaluated in the way we normally consider macro risks. As John told Bloomberg last week, it is a 'black swan' event: unpredictable and impossible to quantify in its gravity and market impact.

So what can we do? We stuck to our team mantra in managing risk: ‘prepare, don’t predict’, as we have been saying for several years now. When looking at the coronavirus, then, we assessed what catalysts could cause us to change our management of risks in different portfolios, given their differing objectives and time horizons. We also built different scenarios for the market impact of a full pandemic, a mild contained virus scenario, and a V-shaped economic recovery (a severe initial hit, but relatively short-lived).

That approach has meant that we entered the recent market volatility in a relatively conservative position and we have been quick to react where necessary for particular strategies, for example by reflecting our concerns about systemic risk as the ripple of virus cases outside China became a wave. 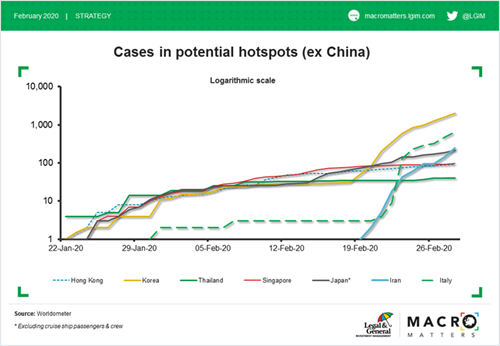 It is now clear that the virus will impact more than 50 countries and is likely to disrupt economic activity materially across the world. China and Singapore have demonstrated considerable success in managing contagion, which suggests a form of containment strategy may be effective, but they have accepted a considerable economic cost in doing so. As James has explained, the Chinese economy could contract at a double-digit pace in the first quarter.

Efforts to limit the spread of the virus are likely to benefit the impacted economies over the medium term, despite the immediate slowdown, while also helping to mitigate the risks for other countries. Time is a useful commodity in this context. We track China’s daily activity across measures including coal usage, transport, and property sales; they all indicate a significant economic impairment and a very gradual return to normality. 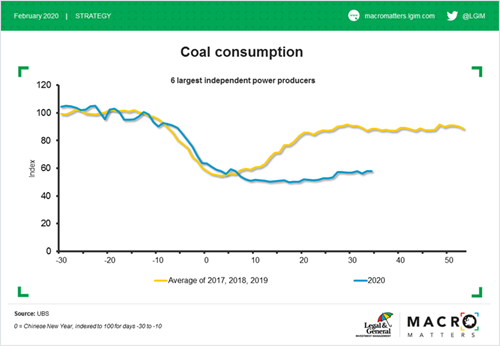 With outbreaks occurring across Europe, we expect extensive disruption in this region too. The US Centers For Disease Control warned of a similar ‘community transmission’ in that country as well; Tim has analysed the prospects for the US economy in greater detail here.

One of the reasons countries like Italy have seen higher numbers of reported cases so far is simply that their testing is more extensive than in other countries. Moreover, the US has now reported its first home-grown case – an individual with the virus who is not traceable to a person who has travelled from an infected area. This implies there are people in the US who are carrying the virus undetected. The fact that the US has so far conducted only 400 tests doesn’t help the local containment effort against the virus, in our view.

It feels like markets have now priced in some of these alarming possibilities for escalation as a base case, with equities down by more than 10% from peak to trough at yesterday’s close. For reference, our bear case has another 10% downside.

As investors, our focus now is on what catalysts would cause further downside or, conversely, whether policymakers will act to support markets.

On the downside risks, research by the World Bank suggests that relatively mild international disease outbreaks have historically taken 70 basis points off global economic growth. Severe epidemics have been associated with a 5% cut in global growth. The former would be a modest adjustment to the market’s current assumption, while the latter would be similar in magnitude to the average post-war recession.

In distinguishing between those extremes, we are looking at evidence of the extent to which developed markets’ containment strategies are failing and trying to understand the disruptions to global supply chains from the localised outbreaks we have seen so far.

On the potential for policy intervention, we have now seen fiscal stimulus announcements in China, Malaysia, Indonesia, and Hong Kong. The US administration could also support markets from here by unilaterally dropping tariffs on Chinese imports, and the markets are looking for something like 75 basis points of rate cuts from the Federal Reserve. These actions may not fix the underlying issue, but they can do a lot to support market sentiment.

In the midst of these grave challenges, we must also remember that asset prices face other risks – the US election, for example. It seems at the moment that Bernie Sanders is the front runner for the Democratic nomination, and he is not perceived as a market-friendly candidate. ‘Super Tuesday’, when many states hold their primaries, takes place on 3 March so the composition of the presidential contest could be a done deal by this time next week.

Against this backdrop, we are defensively positioned: long duration and underweight or short equities. While many investors shunned government bonds for being too expensive, we remained disciplined in maintaining diversification and understood the market would still be likely to pay a high price for defensive assets if any macro risk emerged. This week’s new lows in US Treasury yields highlight the value of diversification and risk management even in the overwhelmingly bullish markets we saw at the start of the year.

For the longer term, things don’t look too bleak. We expect a recession, should it occur, to be mild, with the most dangerous financial excess built up in China. This means markets could start to see light at the end of the tunnel relatively quickly.

As to when we would buy equities again, we would need to see clearer evidence of panic in markets or a higher probability of the bear case priced in. We have identified a batch of indicators as the most informative for signalling market distress and they form a key part of our investment process. Two weeks ago, John described how we are monitoring developments through our own economic models and are challenging narratives.

It is very tough to overcome our own worries when all around us are in despair, but we must try as such times can often offer the greatest upside opportunities.