The coronavirus has led to another round of economic uncertainty and a severe hit to GDP growth in China but, providing the containment efforts are successful, we see little impact on economies such as the US.

There is no doubt the coronavirus will have a large negative impact on China’s economy in the first quarter. Prior to the outbreak, China was expected to continue growing close to an annual rate of 6%; now we expect year-over-year growth to turn negative and, with large parts of the country’s production economy still shut, it could be a deep contraction. Since China represents around 16% of global GDP, this change alone will make a significant dent in the global aggregate economy. Clearly China’s near neighbours are most impacted by the disruption in the country, but what about developed economies such as the US?

The US has managed to grow around 2% over the past year despite the drag on growth from the trade war. US activity data have surprised positively since the start of the year. Hiring has remained solid, but without much sign that the labour market is overheating, and consumer confidence is near historic highs. Manufacturing has shown some sign of recovering. One of our favourite indicators, the Senior Loan Officer survey, shows that banks became slightly more willing to lend around the turn of the year. First-quarter GDP growth might suffer a slight dip from the Boeing production halt but, overall, US domestic demand appears resilient.

With a ‘Phase One’ deal now signed with China, US exports to the country were set to recover (even if the purchase targets appear wildly ambitious, in my opinion). Yet even if exports don’t pick up, they probably won’t fall at the 20% pace seen over the past year. Ironically, the trade war has made the US less reliant on China both in terms of export exposure and supply chains given the large-scale trade diversion already witnessed. The one channel which is a clear negative is business travel, tourism, and education services for Chinese visitors to the US. These represent around 0.2% of GDP. If we assume numbers will be down by around 50% in the first quarter, this would be sufficient to take four-tenths off US GDP on an annualised basis. It is worth noting that the mid-winter months are seasonally weak, so perhaps the reduction in visitor revenues will not be as severe as the seasonally adjusted GDP numbers imply.

There are other mitigating factors on US GDP. The reduction in Chinese demand has depressed commodity and oil prices in particular. This will generate a boost for US household real incomes and consumer spending. The energy sector will be worse off, but US energy investment is currently relatively subdued. Furthermore, lower oil prices are impacting inflation expectations and the expected path for US interest rates. This has led to a fall in mortgage rates, a boom in mortgage refinancing activity, and an additional boost to the US housing market, which was already showing signs of recovering. Lower long-term interest rates also reduce debt-servicing costs for the corporate sector looking to borrow or re-finance. 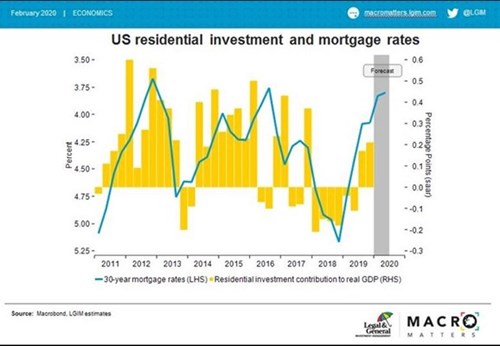 Financial channels are also important, but so far there has been little adverse effect on stock markets. Even if the S&P 500 index fell by 10%, this should not adversely impact consumer spending since none of the wealth gains in recent years appear to have been spent. We are watching the dollar carefully. If the situation in China deteriorated, the currency remains a potential escape valve, but the Chinese authorities will probably target stability, especially given the commitments made as part of the Phase One trade deal.

So providing activity in China rebounds in the second quarter, the drop in interest rates and lack of financial spill-over is probably sufficient to offset the direct demand loss from China, leaving overall US GDP growth virtually unscathed. Of course, this all assumes the efforts of the Chinese and global authorities are successful in containing the spread of the disease.