Clueless, but not complacent

As the old adage goes, prediction is difficult, especially about the future. So instead, we explain some of our forecasting philosophy and where, if at all, we might be able to provide some insight about the economic outlook.

I considered offering some views on the economic outlook for the rest of the year and into 2018, but I started skimming through Howard Marks' memos and was reminded that there are two classes of forecasters: Those who don’t know and those who don’t know they don’t know. Then I began to reflect on which category I fall into.

Adding to my nervousness is the limited upside from making a statement based on the Economics team’s analysis such as “the probability of recession appears low over the next 12 months”. We are on a hiding to nothing as this view appears (more than) fully priced into markets, while the cost of being wrong would likely be severe. At least back in early 2016 there were decent returns to be made from the no recession call.

There are many potential forecasting mistakes. One is to assume we are 'overdue' a recession because the expansion is already long in the tooth. Another would be to extrapolate indefinitely today’s current benign economic environment of steady growth and low inflation which is effectively the consensus view. The problem is that in the absence of an identifiable trigger for change, this seems the most likely outcome for the next few months at least. Since we believe in the importance of macro, what can we do?

For the Asset Allocation team, we continue to try and work out roughly where we are in the economic cycle. For example, we thought that by now there would be stronger evidence that the US had moved into a late cycle phase. But many of the indicators we track (see table below), especially inflation and wages, suggest the cycle has not really progressed over the last year. 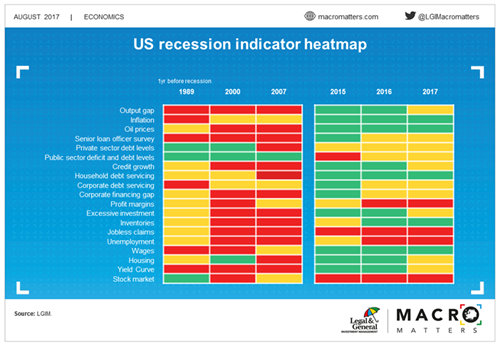 We also attempt the challenging task of overlaying the structural forces which mean this cycle might not resemble the ones seen in the past. This triggers some great debates and a range of opinions within the team and across the firm. Overall, we note that unemployment has continued to fall and asset prices have risen. This sets up the possibility of a self-reinforcing process of rising confidence and spending and the potential for a period of stronger growth and possibly higher inflation before this market cycle ends.

Central banks are aware of this dynamic which is why they are considering withdrawing some of the extreme stimulus delivered since the financial crisis. But if you are sceptical about the ability of economists to forecast, conviction about the impact of central bank balance sheets on the economy and asset prices is likely to be even lower. Economists are still struggling to QEQE (quantify the effect of quantitative easing) and we have no precedent for the reversal of this policy. Or as Ben Bernanke quipped in 2014, “the problem with QE is that it works in practice, but it doesn’t work in theory”.

Because central banks are unsure about what will happen and with no immediate inflation threat, they have decided to move extremely cautiously. And here comes an insight (and maybe a forecast). Knowing that we don’t know makes it more likely that central banks move too slowly than too fast. They have even told us that they feel more comfortable dealing with inflation than deflation. The consequences are unclear. Does it ultimately lead to inflation, resource misallocation, even greater leverage or financial market distortion?  But none seem particularly good in the medium term, especially when risk assets are priced for 'goldilocks' conditions.

Our approach on political events has been ‘don’t predict, prepare’ and for economics we think about scenarios and probabilities. After all, as one of Howard Marks’ favourite quotes from Mark Twain says: “It ain’t what you don’t know that gets you into trouble. It’s what you know for certain that just ain’t so.”