Estimating and monitoring the economic impact of the coronav

High-frequency economic indicators suggest the Chinese economy has yet to recover from the coronavirus, supporting anecdotal evidence of extended factory closures. Depending on how quickly activity returns to normal, the Chinese economy could contract at a double-digit pace in the first quarter, pushing annual growth down to just 3%.

As the coronavirus spread, we came up with two methodologies to quantify the economic impact. The first was a comparison across different countries with what happened during the SARS outbreak of 2003. The second was a bottom-up approach looking at how many working days were being lost due to the government’s contagion strategy. The continued weakness of high-frequency indicators suggests the initial economic impact could be much larger than that experienced during the SARS epidemic in 2003.

The first chart below shows a robust relationship between SARS infection rates (x-axis) and the change in quarter-on-quarter GDP growth (y-axis) during the SARS outbreak. As we can see, countries with a higher infection rate suffered a larger decline in GDP growth in the second quarter of 2003. The x-axis is logged because the marginal impact of a rise in infections, from say 0 to 1,000, is more significant than a rise in infections from 100,000 to 101,000.

This analysis suggests China’s current infection rate (72,500 at the time of writing and still rising) is consistent with at least a 3% GDP hit in the first quarter. Given our pre-virus baseline was for first-quarter growth of around 1.5% quarter on quarter, this hit would be consistent instead with a contraction of around 1.5% in the first quarter. 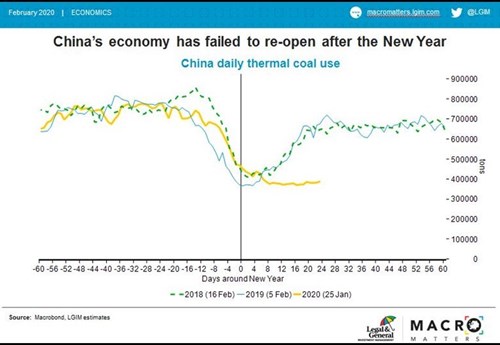 What about the year as a whole? The countries most affected by SARS all rebounded in the third quarter of 2003 and their level of economic activity recovered to its pre-virus trend. So in the example above, after contracting by 1.5% in the first quarter, China would grow by 4.5% in the second quarter and revert to its 1.5% trend thereafter. This means the annual growth rate for 2020 would come out around 5.25%, instead of 6% in a pre-virus world.

This seems to be where consensus growth forecasts are currently anchored, but high-frequency data suggest the risks are skewed to the downside. There are numerous anecdotes about factories yet to reopen, ports unable to process cargo, quiet streets, and migrants unable to return to work. High-frequency data such as coal usage, traffic flows, and property sales allow us to quantify this effect.

Coal usage tends to fall by 50% ahead of the Chinese New Year and then recover within three weeks. However, it currently remains depressed, suggesting limited industrial activity. An index of traffic congestion is down 25%, while property sales are down 90%.

Overall, we assume the economy is still operating at 40% below normal and we’re already halfway through the quarter. Even assuming a gradual return to normal by the end of March, the economy would still contract at a double-digit pace in the first quarter. If the economy returns to its pre-virus path thereafter (rather than over-producing to make up for the lost output), this would push annual growth down to around 3% for the year, significantly below consensus.