The Democratic party in the United States may wish to learn from Labour’s experience in the UK election – and so should investors.

The Democratic caucus in Iowa looks to be a dead heat between Bernie Sanders and Pete Buttigieg. Political bookmakers now place “Uncle Bernie” as the single most likely candidate to win the Democratic nomination and face off against Donald Trump in November. This genial septuagenarian, a self-described “democratic socialist”, is so far to the left of his own party that he has chosen to sit as an independent in Congress since the 1980s rather than with fellow Democrats.

Psephologists* will spend months and years agonising over the causes and consequences of last year’s general election in the UK. Did the British people vote to “Get Brexit Done”, or is there another lesson in the result? Maybe one that has implications for our Anglophobe cousins across the Atlantic?

(* Psephos is the Greek for pebble. Ancient Greeks apparently used pebbles instead of ballot papers when voting. Psephology is therefore the academic study of elections, particularly using quantitative methods. Presumably, it is also the study of pebbles.)

For me, the two charts below sum up the story nicely. 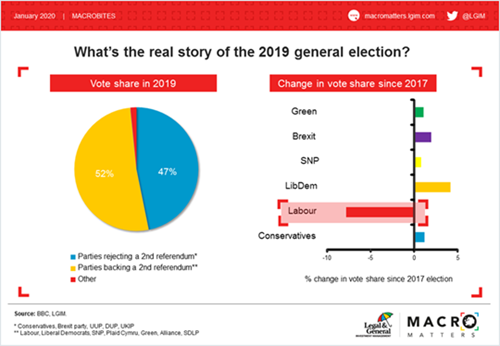 The chart on the left reveals that it is a bit disingenuous to argue this was a clear Brexit vote. 51% of voters put their cross in the box next to a major party explicitly advocating a second referendum; only 47% of votes backed an explicitly pro-Brexit party.

The chart on the right tells what I think is the real story of this election. Since the last vote, every major party increased their vote share with one glorious exception. The Labour party’s vote share slumped to 32% and it won its lowest share of seats since 1935. It is hard not to be reminded of the 1983 election in which Michael Foot’s Labour party wrote “the longest suicide note in history” and slumped to spectacular defeat.

There is obvious local interest in the UK’s rejection of the Corbyn agenda. It’s a cliche that markets like certainty. A Conservative majority gives more clarity on some of the more existential worries. The alternative outcome of a hung parliament would have come with a host of uncertainties about the relationship with Europe, the potential for a Scottish referendum, nationalisation concerns and corporate tax rates.

But the bigger picture for global investors is probably whether this tells us anything about the 2020 US presidential election.

The left wing of the Democratic party explicitly aligned themselves with the Corbyn-led Labour party. Back in 2017, Senator Sanders could not have been much clearer:

There is a real similarity between what he has done and what I have done … I have been very impressed by the work that Corbyn has done and the campaign he is running.

On the day of the election, Representative Alexandria Ocasio-Cortez (AOC) sent a Labour party campaign video to her online followers accompanied by the comment that: “the hoarding of the wealth by the few is coming at the cost of people’s lives.”

Given the Labour party’s crushing defeat, there should now be even more question marks about the electoral viability of Democratic candidates from the far left of the party. In the somewhat cryptic words of Tony Blair, a Trump versus Sanders (or Elizabeth Warren) election risks becoming one in which “a traditional left-wing party competes with a traditional right-wing party with the traditional result”.

Centrist Democrats, such as former Vice President Joe Biden, have taken note of Labour’s inability to translate an unashamedly socialist agenda into electoral victory and the dangers of fighting a campaign from the political fringes rather than the centre.

If the left’s chastening defeat in Britain does nudge Democrats back towards the middle ground, investors will welcome the shift. As Jason Shoup explained in our latest CIO Outlook, any number of the policies supported by the left wing of the Democratic party – such as higher taxes, a fracking ban, greater healthcare and pharmaceutical regulation, breaking up the banks, or clamping down on the tech titans – has the potential to disrupt markets.