How bad the next US recession?

The next US recession, if it occurs relatively soon, is likely to be mild. This matters for the potential scale of asset price declines.

We currently see the probability of the US entering recession over the next 12 months at around 30%. This is the most elevated risk we have forecast since the current expansion began, but we also need to think about the nature of any downturn.

There is a big difference between a technical recession (two quarters of negative growth) and a financial crisis, large declines in output, collapsing profits, and a massive rise in unemployment.

Perhaps the fragile US-China trade truce and move to phased negotiations has slightly reduced the risk of a full-scale escalation and recession. The US and China have tentatively agreed to continue working on a small deal. This has meant October’s tariffs have been suspended, though the threat of the December 15 tariffs (which are particularly damaging for consumer goods) remains.

The prospects for a comprehensive deal and the removal of all tariffs nevertheless still seem remote, so the dispute is likely to drag on and could gradually undermine confidence into 2020.

There is, after all, still no timetable for rolling back the existing tariffs, no path to de-escalation, and the steps taken so far fail to tackle the tricky issues of industrial policy, government subsidies, and enforcement. There is also the battle on technology, national security, human rights, and threats of financial flow restrictions. All of these could pose serious risks to the trade talks.

So while escalation has been avoided for now, talks could easily break down and this does not provide a boost to confidence that would meaningfully change corporate behaviour. Moreover, what if the damage has already been done from the earlier tariffs, or what if the situation deteriorates again? What type of US recession might this cause?

There are several reasons why the next recession is likely to be mild. The length of the expansion, now in its 11th year, does not mean the US requires a deep recession to purge excesses and reduce overheating. Despite low unemployment, the output gap appears around zero and inflation is well under control. So any downturn should quickly create economic slack and allow policy to focus on supporting growth.

Cyclical parts of the economy - such as housing, autos, and business investment - do not appear overstretched. Indeed, in the case of housing, the current level of residential investment is typical of that seen at the start of the economic cycle. In other words, it is hard to crash if you have not got off the runway.

In addition, household-sector balance sheets appear in particularly good shape. Debt has fallen and debt-servicing costs are historically low. The savings rate appears relatively high compared with household wealth (though savings data can be prone to substantial revision). So households could probably tolerate some declines in asset prices without having to raise savings from current levels.

Furthermore, if there is a recession, the banks seem much better capitalised and less exposed to defaults, so they should not amplify the downturn by restricting credit to worthy borrowers. The Senior Loan Officer Survey should be a good indicator to check for a credit crunch. 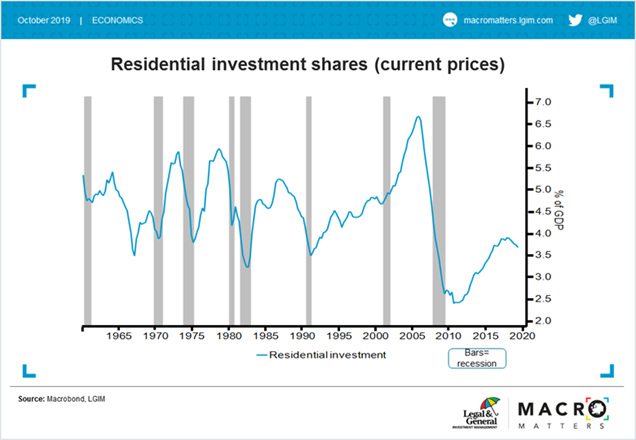 There are three main dangers to this mild recession view, however. The first is that while the downturn might not be terribly severe, the recovery could prove challenging. Historically in a recession, US interest rates have been slashed by more than the 180 basis points which are currently available (before considering negative interest rates).

The US is also running a large structural budget deficit of close to 5% of GDP. This leaves less space for a discretionary fiscal stimulus. However, the Federal Reserve (Fed) is attuned to this danger. With inflation under control and the fear of being stuck at the effective lower bound, the Fed has strongly hinted that it would deploy asset purchases sooner and more aggressively than before.

Monetary policy should still prove effective if the Fed can reduce mortgage rates below current levels. This would probably unleash a wave of mortgage refinancing activity and encourage mortgage equity withdrawal and home-buying. In addition, low bond yields could allow more fiscal stimulus even though it would lead to more debt.

The second concern is if a US downturn coincides with other global shocks. A combination of escalating trade wars on multiple fronts, a China hard landing, a crash-out Brexit, an oil price shock, and rising geopolitical tensions would exacerbate any US downturn. This would indeed be nasty, and while these shocks are not entirely independent, the probability of several simultaneous shocks is mercifully low.

Finally, while I am not in the debt-deflation camp, one cannot ignore the argument. The corporate sector appears highly leveraged. The prospect of a downturn might lead to a collective decision to pay down debt more quickly if companies worry that the real debt burden would rise in a deflationary environment.

But this type of behaviour could quickly become self-fulfilling. If other companies spend less, they reduce each other’s income, leading to even more severe cost cuts in an attempt to pay down debt. Animal spirits can be fickle, but I believe US inflation expectations are well anchored in both directions and policy would respond to prevent this ‘Paradox of Thrift’.

Overall, in the absence of policy errors, the US appears relatively well equipped to cope with the inevitable shocks. And if the next recession is relatively mild, how much will equities fall? This is a question that Lars will attempt to answer in a future blog.