We don't need no education

In 1979, Pink Floyd cried "Hey! Teachers! Leave them kids alone!”. Ironically, this marked a turning point. The contribution to US wage growth from educational attainment appears to have peaked since the early 80s. This is just another brick in the wall in our argument of weaker US trend growth

Wage growth and productivity remain stubbornly weak around the world. Over the past century, each generation has been better off than the previous one. But this is no longer the case for the current “Millennial Generation” according to fascinating analysis on wages (adjusted for inflation) by age and generation by Resolution Foundation and others. 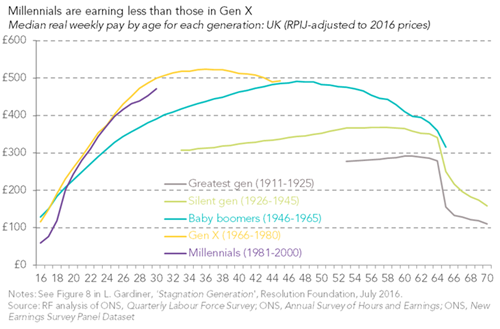 Why is this the case? My initial inkling was that it was due to inflation mismeasurement making it hard to compare real wages across time. But even if inflation of digital services is indeed overestimated, Millennials still seem no better off than Generation X. How come? Is it due to increased competition from offshoring and immigration pushing down wages? Or the secular decline of trade unions?

What about education? Have we reached peak education? If educational attainment has stopped improving than that would act as a drag on wages and productivity.

I’ve previously highlighted how ageing demographics are depressing US trend growth. Not only is the US running out of workers as babyboomers retire, but there’s also no repeat of the productivity boom of the 1980s/90s when babyboomers hit their prime. So I began my analysis there.

The US has experienced phenomenal changes in the educational attainment of its workforce over the past century. 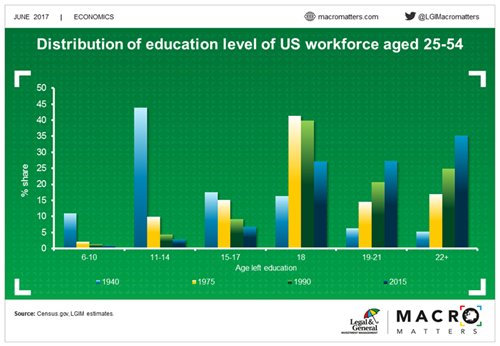 These are staggering changes. A better educated workforce should earn more and be more productive. A baby boomer who completed secondary school earned twice as much as a high-school drop out, while a bachelor’s degree holder earned six times as much!

So to estimate the hypothetical impact of a better-educated workforce on earnings and productivity, I multiplied the average wage earned by a baby boomer for each education level by the share of the workforce with that qualification.

The chart below plots the annual and 10-year growth rate in that implied wage level. You can see an inflexion point in 1980 where the rate of improvement in implied wages from longer education slowed. Ironically (or perhaps because of?!) the growth rate peaked just after Pink Floyd cried “Hey! Teachers! Leave those kids alone!” in late 1979. 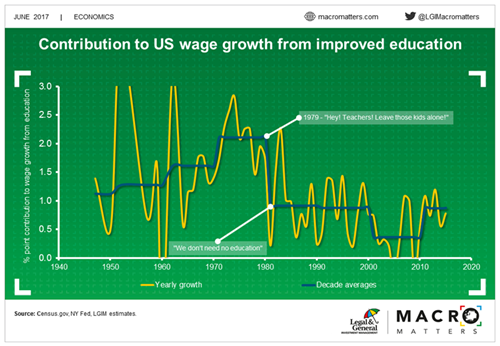 All in all, it’s just another brick in the wall of our argument of weaker trend growth. There are many factors behind the productivity and low wage-inflation puzzle. Our theoretical estimate of the contribution to real-wage growth from longer education has slowed since 1980. Combined with other analysis on the impact of ageing demographics, it suggests US trend growth could be closer to 1% than 2%, much weaker than the pre-crisis 'norm' of around 3½%.