Ageing demographics have probably halved US trend growth from 3¼% to 1½%. The number of retirees is outstripping school leavers for the first time ever. So immigration - a key concern of President-elect Trump - is now the only driver of working-age population growth.

That’s not the same as running out of people. Rising life expectancy means the population is still growing steadily by around 1% per year. But for the first time ever, the number of retirees has caught up with the number of school leavers. This is because the peak birth rate (baby boomers) was in the late 1950s and they’re beginning to withdraw from the labour force. 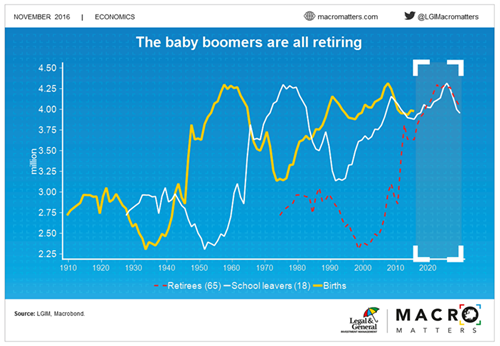 What does this mean? It means trend growth has probably halved. Using UN population projections for each age cohort, and that age cohort’s propensity to work, we estimate the number of people willing to work is set to rise by just ¼% over the next decade. This compares with a long-term average of 1¾%. And these projections assume steady immigration, so the risks are clearly skewed to the downside under Trump.

In follow-up posts, we’ll also look at the impact of ageing on productivity, whether there’s scope for ‘discouraged’ workers to re-enter the labour force and the implications of our analysis for US monetary policy. These posts represent a summary of our more detailed Fundamentals note “When I’m 64”.

But for now, demographics pose a difficult dilemma for Donald. If making America great again means getting trend growth back to 3%+, that’s a nearly impossible task, even without restrictions on immigration.