The outlook is darkening. Escalating trade wars, Brexit risks, and deteriorating US corporate fundaments all suggest recession dangers are rising.

The news since last month’s economic update has prompted us to reassess matters, especially after the fragile trade truce between the US and China was scuppered by President Trump’s tweets.

The timing of that breakdown was particularly bad, as the top US negotiators – Steven Mnuchin and Robert Lighthizer – had just returned from a resumption of talks in Shanghai. Yet President Trump apparently went against most of his advisers in announcing 10% tariffs on the remaining $300 billion worth of imports from China, effective 1 September.

This round will directly impact high-profile consumer goods, just in time for the holiday shopping period. The lack of warning also shocked the Chinese, who are probably thinking Trump is too unreliable and too unreasonable to bother with serious negotiations. As Emiel has pointed out, a deal looks further away in this environment of broken trust. China’s calculation is probably already shifting towards inflicting increasing pain on the US to precipitate a change in administration after the 2020 presidential elections. The US reaction of labelling China a currency manipulator in response to a small weakening of the renminbi has only inflamed tensions further.

What does this do to our forecasts? The direct effects appear manageable, but even though each tariff round is just a slither off global growth – in this case, another 0.2% reduction – it is starting to add up. Global growth has already significantly cooled over the last year and, with capex struggling, the build in inventories means the manufacturing downturn could intensify. We worry that we could be approaching a tipping point where confidence is more seriously damaged and firms cut back on investment and employment. The latter possibility would undermine consumers, who thus far have been relatively well insulated.

Two other factors also add to the downside risks. First, the approach taken by the new UK Prime Minister and his pro-Brexit cabinet has been more aggressive than we expected. We have therefore been forced to raise our probability of a ‘no deal’ Brexit. In this scenario we would expect the UK to move quickly into recession, followed shortly by the euro area. For the Eurozone, this would clearly be problematic given the lack of policy tools available to offset the shock. At least the Federal Reserve (Fed) has scope to stimulate the interest-rate sensitive parts of the economy such as housing. Our constantly evolving Fed view, now incorporating a further couple of cuts this year, is one reason we have not taken a bigger axe to our US GDP forecast. We also don’t doubt the Fed would use all of the tools at its disposal if the trade war were to threaten recession more seriously.

The second issue is a niche area for economists, but affects our recession indicators and views on markets. As part of the annual US benchmark revision to the national accounts, there was a large downward revision to corporate profits. The income was reallocated to households and shows up in a higher personal saving rate. Our GDP component models now suggest stronger consumer spending growth offset by lower business investment, leaving overall GDP unchanged. But the composition shift means the previously vulnerable corporate sector is even more exposed. Two of our recession indicators, profit margins and the financing gap, now move to red, while the household sector becomes even more robust, but was never likely to be a recession trigger this cycle. In addition, weaker capex has negative implications for the US manufacturing cycle, which tends to have a bigger influence on US equity and credit markets than implied by its weight in GDP. 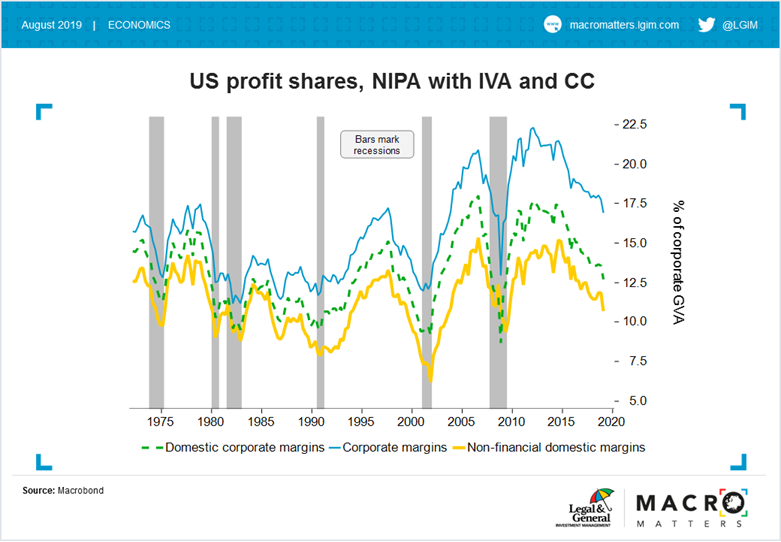 Amid the gloom, though, there has been one positive development: the US has agreed a budget deal and extended the debt ceiling for a couple of years. This removes an important downside risk, but fiscal policy is still in the process of becoming more neutral after adding nearly 1% to growth last year. But overall, while a global recession is not our base case, this is the most worried we have been since the euro-area crisis.