He said, Xi said: President Trump believes tariffs are great for the US because China is paying; the evidence suggests otherwise.

Last month, I wrote the following: "The good news is that both the US and China are sounding increasingly positive that a trade deal can be reached in the next few weeks". Oh dear – I regret the omission of a disclaimer warning that it would only take one tweet to render this statement redundant. We are still trying to get to the bottom of why the trade deal collapsed. Both sides have different explanations. The US blames China for reneging on previously agreed text. For China it seems as if either something got lost in translation or President Xi Jinping was unhappy with what appeared to be a very one-sided negotiation. China was not able to tolerate the pressure to change domestic laws and unrealistic demands for increasing imports from the US, all without a reduction in tariffs or anything else in return.

So what happens next? It appears as if talks are at least continuing, though China has become more defiant and insists that it won’t cave in to bullying from the US and is prepared to fight a trade war. Trump seems likely to meet Xi at the G20 at the end of June and the market seems to be attaching a relatively high probability to this leading to a resolution. In the meantime, the US has raised tariffs from 10% to 25% on approximately $200 billion worth of imports and has begun the process of raising tariffs on essentially all remaining imports from China, worth around $300 billion. Just as with the original Section 301 Action, there is a public consultation so the final set of tariffs won’t be ready until at least the time of the G20 meeting.

Economists disagree on many issues, but the one almost universal finding is that tariffs are bad

We were not expecting the rise in tariffs to 25% and so would be inclined to take around 0.1-0.2% off our year-ahead US GDP numbers, presuming the 25% tariffs stick for a few months. But if Trump goes ahead with tariffs on all the remaining imports at 25%, this could take an additional 0.4% off US GDP. Unfortunately, it could be even worse than that. China has already retaliated but, as discussed last summer, it can’t match the US tariffs dollar for dollar. However, it can attack the substantial US interests in China. The negative impact on confidence could hit some threshold which causes a significant correction in markets. At this point my Fed view goes even further off course and we could see rate cuts, but only after the damage is already done. It is hard to see the Fed being pre-emptive when the economy is at full employment and given the potential for Trump to change his mind and suddenly strike a deal.

Economists disagree on many issues, but the one almost universal finding is that tariffs are bad. President Trump either thinks very differently or is bluffing as part of the negotiations. He claims he is raising money from the "massive" tariffs being paid to the US from China. However, the evidence suggests US importers are either paying ALL the tariffs or sourcing products from elsewhere to avoid tariffs. 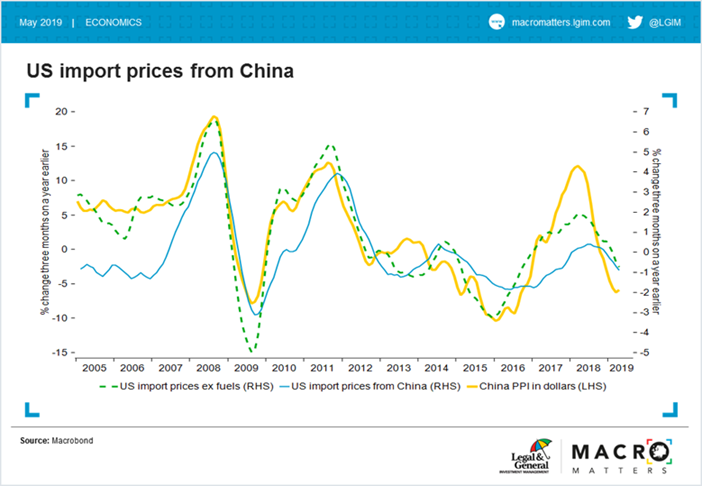 One fact we established in last month’s misjudged trade blog is that bilateral tariffs lead to trade diversion. With March data now to hand, this trend has continued. Overall US imports remain flat compared with last year, while China continues to lose out to a now more competitive South Korea, Vietnam, and Mexico. Trump even tweeted that Americans can buy from non-tariffed countries. But if the goal is to reduce the trade deficit, then this strategy will clearly fail.

So far the $250 billion worth of products attracting tariffs has been largely capital and intermediate goods. These appear to have been partly absorbed in US supply chains, insulating the US consumer. This could change if Trump goes ahead with the final $300 billion worth of goods which will impact all the consumer goods from China – clothes, footwear, video games, TVs, phones, sporting goods, furniture, etc. Perhaps that will lead to more of a public backlash.

Both sides would clearly suffer from an escalation. China sees a reduction in its exports, while US firms experience a hit to profits and the US consumer pays higher prices. In theory, this should be an incentive to find a compromise. But after being too complacent last time, I am now more worried. The trade war is a significant risk to an otherwise relatively benign outlook.