Our medium-term view on markets is changing. Recession probabilities are increasing and trade wars are not helping. This makes us shy away from buying during market dips and move towards selling equities when they strengthen.

There are plenty of times when you wish you had kept your mouth shut rather than making a market prediction. But sometimes you kick yourself for not committing an expectation to writing.

On Friday, after President Trump imposed a new 10% tariff on all remaining US imports from China, I presumed that the Chinese government could become more willing to let the Renminbi weaken through seven against the US dollar. Well, precisely that happened over the weekend.

So, emboldened by that prescience, let me share some thoughts on what may happen next. Take China first.

In the wake of these recent developments, we have adjusted our China outlook marginally lower. For 2020, we have downgraded our growth forecast from 5.7% to 5.5%. This takes into account consequences that go beyond the first-order effects – such as on sentiment and weaker investment – but does presume there will be some offsetting stimulus.

The next question is to what extent China will retaliate beyond a weaker currency and the reported suspension of agricultural imports from the US by state buyers.

It is likely that non-tariff barriers to trade will now increase. US companies operating in China are likely to find the environment increasingly difficult: both directly through increased regulation, fines, and discrimination; and indirectly via a patriotic boycott of US brands and limited tourist travel to the US.

The reaction so far suggests that China might not make meaningful concessions to reach a deal any time soon. We believe there is an increased risk of a delay or cancellation of the planned trade talks in September.

The relative resilience of the Chinese economy and the timing of the US presidential election all make the ‘long game’ more attractive from China’s perspective. From a US point of view, the prospect of a ‘real’ deal from China looks increasingly remote. Each of the remaining choices – a non-substantive deal or no deal – might hurt the US president in the upcoming election.

We are seeing countries such as Vietnam, Korea, and Mexico benefit from some trade diversion at the expense of China. This could lead to some new hires and capex in these regions. It also invites the question of whether there is now any incentive for China to do a deal. The damage from the China uncertainty premium is already semi-permanent, and Trump’s deals (with Mexico, for example) have proven to be untrustworthy.

For the US, the direct impact of this latest salvo in the trade war is likely to be a further 0.2% off GDP growth and a 0.1% increase in core inflation. This seems manageable, despite adding to the risks faced by the market, although the indirect effect on confidence and financial conditions is highly uncertain. So far consumer confidence has been quite immune to tariff-related machinations, and moreover the Federal Reserve can and will offset some of the negatives.

Furthermore, the recent annual data revisions to the US GDP numbers indicated that corporate fundamentals may look worse than they once did but the household sector appears even stronger, as the savings rate is higher than previously assumed. This strengthens the hand of the US consumer.

The US economy is being carried by the consumer, as consumer spending accounts for 70% of GDP. Consumer fundamentals are strong, confidence is high, and the Federal Reserve will maintain its easing stance.

However, our recession indicators have worsened following the GDP revisions. Corporate profit margins have fallen, meaning the corporate financing gap now flashes a warning sign. On top of this some aspects of the yield curve are also in the recession ‘danger zone’. This means we currently have six or seven warning signals and one positive signal, namely US household debt. 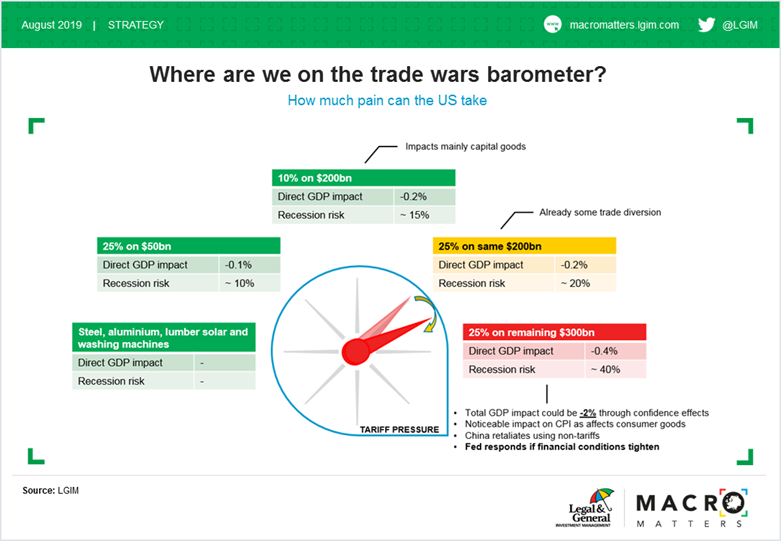 In our latest economic roadmap, presented by our economists, the recession probabilities have increased due to trade-war concerns. Predicting Trump’s next move is clearly a mug’s game, but we believe part of the impact of the trade war will be permanent as uncertainty around erratic US trade policy becomes entrenched. Moreover, as I mentioned, Trump has successfully introduced an uncertainty premium into supply chains involving China. This impact will be semi-permanent, dragging down foreign investment in China over medium term.

This has the following consequences for our portfolios: we are now more inclined to sell during periods of strength, and our threshold for buying during dips has become higher. In other words, the market needs to weaken further before it represents a buying opportunity.