The cycle goes on

My prediction of further Fed hikes has not come to pass, but my expectations for an extended cycle still look valid as lower interest rates and a solid consumer sector should support growth.

The ceasefire in the trade war agreed at the G20 summit in Osaka, which maintained existing tariffs, creates a window for commenting on the economic outlook. It is admittedly a fragile truce, which could be scuppered by a tweet and is ultimately unsustainable. Eventually ‘tariff man’ is likely either to lose patience and start swinging his favourite club, or to pivot towards a deal.

All this uncertainty appears to have done somewhat more damage to global manufacturing and trade than we anticipated. China is bearing the brunt, with goods exports to the US down 14% year to date through May. Erik expects more stimulus to offset this shock. The trade war is disrupting supply chains and hindering investment as it is unclear where production should be based. Mark Carney recently gave a particularly downbeat assessment of the impact on global growth from the increase in protectionism.

The trade war is one of several reasons my Federal Reserve (Fed) call has gone spectacularly badly this year and, with both the Fed and the market signalling a late July cut, I have been forced to capitulate (again). The debate has even shifted to whether the Fed will deliver a 25 basis point or 50 basis point easing. We have looked at the experiences in 1998 and 1995, both times when the Fed cut in three increments of 25 basis points before resuming the hiking cycle. The former involved a severe tightening in financial conditions in the face of various emerging-market crises and the collapse of LTCM, while the latter was in response to a sharp slowdown in growth following an aggressive 300 basis points of rate hikes into deliberately restrictive territory in the space of only 12 months.

Another reason for the Fed pivot has been inflation developments. At worst, the small undershoot of actual inflation and surprising recent drop in inflation expectations could be deemed chronic, but it is hardly an emergency. On this basis, I would expect the Fed to hold back on cuts of 50 basis points unless the situation became urgent. This would likely require a much more severe hit to growth and adverse financial market reaction. I am not seeing much sign of this at present, but perhaps this is possible in a full-scale trade war escalation involving tariffs on all China imports into the US.

The good news for our growth forecasts (which we only lowered slightly following the May increase in tariffs) is that the plunge in global yields is helping to keep services and employment relatively well protected. In addition, our US recession indicators shown below have improved at the margin in recent months given the reduction in pressure on debt-servicing costs. In particular, US consumer fundamentals remain solid. Low inflation is helping to boost real incomes. Wealth has continued to rise and credit is readily available. Most measures of consumer confidence remain extremely elevated and consistent with continued robust spending growth. Consumer spending accounts for over two-thirds of the US economy, while manufacturing only accounts for about 8% of employment, so it is hard for a recession to occur in the absence of a more significant weakening in this major part of the economy.

Lower mortgage rates should also support the housing market. Residential investment has subtracted from growth over the past few quarters, but could turn positive in the second half of this year. Even if business investment stagnates, overall growth should be around potential in the absence of a trade war escalation. 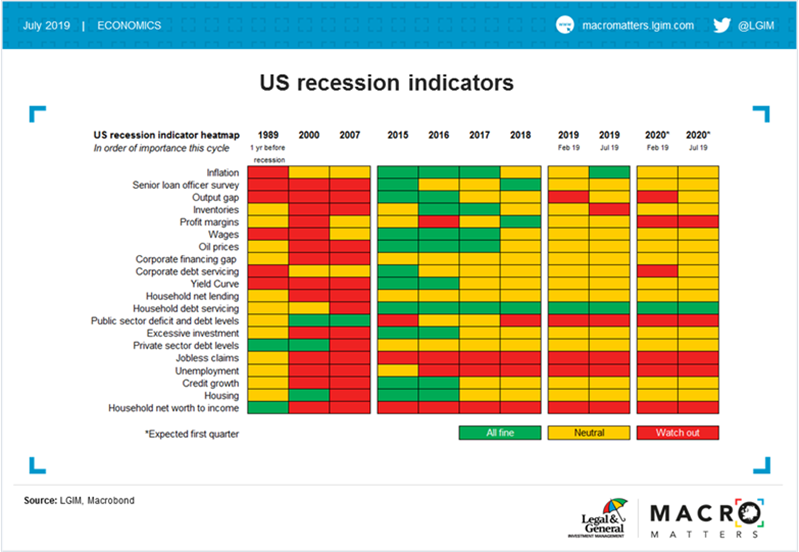 Besides the outcome of the trade negotiations, the other key event to monitor is the budget talks in Congress. In the absence of an agreement, the US faces a moderate fiscal cliff as discretionary spending levels would drop 3% in 2020 due to budget caps under existing legislation. This could take three-tenths off GDP relative to holding spending constant in real terms.

Overall, the cycle is likely to continue to be extended with growth around potential in 2020 as the most likely outcome. The main risk stems from policy errors around the trade war and fiscal policy, though any shock would likely be cushioned by the willingness of the Fed to react to incipient signs of weakness.