China hard landing risk - What can we learn from Japan?

This is the fourth and last in a series of blogs that looks at the risk of a hard landing in the Chinese economy. One problem when assessing this risk is the lack of historical precedents. Very few countries underwent debt build-ups of Chinese proportions, and those that did were usually very small, open economies. The one exception is 1990 Japan which displays some striking similarities with today’s China. 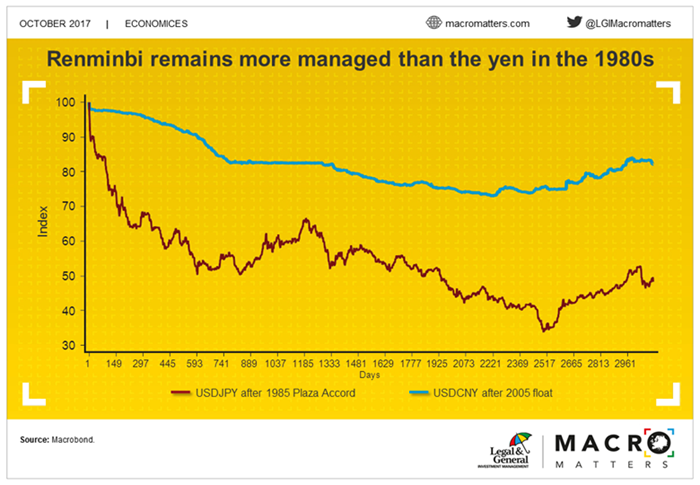 To start, both countries are Asian nations and like China, Japan relied on an export-led growth model for development. Japan faced similar demographic challenges with the working population starting to fall. Both countries are large, relatively closed economies - Japan was the 2nd largest at the time, like China today. Both countries are global creditors with sizeable current account surpluses.

Like China, Japan underwent a surge in corporate debt, which peaked at 150% of GDP versus China’s 165%. And like China, Japan’s public debt was close to 70% of GDP. Japan’s debt build-up was preceded by financial liberation, shadow banking was booming, and the economy relied heavy on property for collateral. And, like China, Japan was pressured by the US to appreciate its exchange rate.

"China has more catch-up growth potential left: its urbanization rate is where Japan’s was in 1953."

We know how the Japanese debt build-up ended - with a hard landing. During 1991-1992 growth fell by 3.5 percentage points and never recovered. What is the takeaway for China?

And, China has additional defences: creditors and most debtors are in state hands. In addition, China’s capital account is more closed and its exchange rate more managed. The value of the yen trebled after the Plaza Accord. In contrast, the RMB appreciated by a mere 40% after the peg was scrapped in 2005. China has also more catch-up growth potential left: its urbanization rate is where Japan’s was in 1953.

With hindsight, Japan had plenty of fiscal space in the 1990. This supports our view that China has ample fiscal space to manage its slowdown.

"China also has additional defences: creditors and most debtors are in state hands."

The bursting of the asset bubble was a key cause of Japan’s crash. This is in line with our view that property would be at the heart of any Chinese hard landing and remains the key risk to watch. So far, the house price increases of 90% in Shenzhen, China’s big-city hotspot, pale against the 300% recorded for Tokyo in the late 80s.

All in all, China seems safer to us than 1990 Japan, but that should not provide investors with too much comfort.