This is the third in a series of blogs that looks at the risks of a Chinese hard landing. In the first we argued that China still has important defences in the form of fiscal space. In the second, we discussed why the odds of financial crisis are not that high. In this blog, we ask whether China sits on a property bubble, which tend to end in violent and drawn-out recessions.

Unfortunately, identifying bubbles is not easy and China’s case is no exception. Looking at nationwide house prices, we find that they have been broadly flat in real terms since 2010 - hardly the hallmarks of a bubble. The price-to-income ratio looks worse - it takes 14 years of income to pay for an apartment in Beijing versus 6-8 years in London and New York. But, observers question these comparisons as only the very rich own houses in Beijing and migrants pull down income numbers. 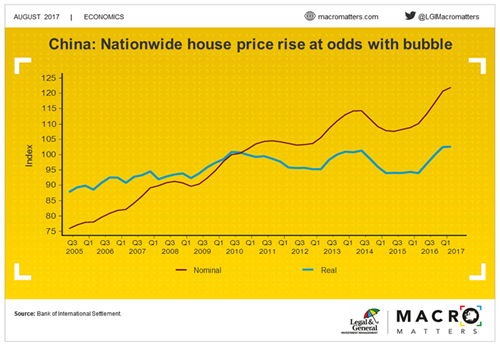 Other indicators are similarly ambiguous. For example, China’s share of construction and real estate in GDP has risen rapidly since 2010 and flirts with the level of peers before the Asian financial crisis. However, it remains well below those of the US and Spain before their respective meltdowns. 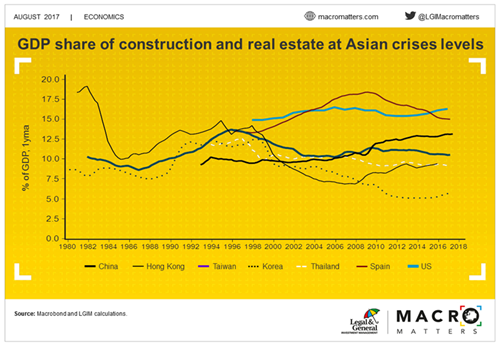 Similarly, residential floor space per capita looks excessive in China. According to IMF estimates for 2012, it was well above typical levels of emerging markets and more in line with those of developed markets. But, significant uncertainty surrounds these estimates: A similar estimate by the Reserve Bank of Australia for 2015 came up with lower numbers.

While the warning lights are not fleshing red, some distortions in the Chinese economy keep us on our toes. There are few assets besides property to invest in, given artificially low deposit rates and a closed capital account. Also, property is a major revenue source for local governments which fosters pro-cyclicality. Finally, property serves as collateral throughout the economy - as a result an estimated quarter of bank assets are exposed to the sector.

Taken together, we believe a housing meltdown remains a risk, rather than the base case. However, the risk is not negligible.