History is littered with episodes where the rules of economics were declared dead, only for these rules to return with a vengeance. You remember the ‘end of the business cycle’ debate in the late 90s or the ‘great moderation’ paradigm of the early 00s? Despite these precedents and despite overwhelming evidence that large debt build-ups can end in tears, we believe a Chinese financial crisis is not that likely over the next 2-3 years.

Financial crises occur when creditors balk at rolling over debt. In the case of China it is hard to see this happening. To begin with, almost all debt is held domestically, taking fickle foreigners out of the equation.

Second, most of the debt is held by banks which are state-owned. Those banks may have more non-performing loans and less capital than they report, but the state stands behind them with plenty of creditworthiness.

Third, most debt is owned by state-owned enterprises. With one state organ borrowing from another state organ rollover risks are greatly reduced.

Banks may have more non-performing loans and less capital than they report, but the state stands behind them with plenty of creditworthiness

Fourth, banks rely mainly on deposits as opposed to risky wholesale funding. This is because the Chinese save a lot and have few other options in which to put their money. The relatively closed capital account helps in this regard.

However, shadow banks are a significant financial risk. Like Special Investment Vehicles in the pre-2008 US they engage in bank-like activities without the safeguards of reserves and capital. But, at this stage they are still small enough to be moved back onto banks’ balance sheet, should creditors become jittery. Banks are so flush in liquidity that even in this event their loan-to-depot ratio would remain below 100%. 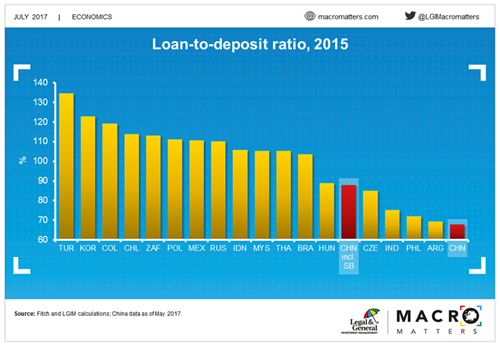 This is not to say that there are no risks. Authorities may be too slow in reacting to an impending panic. Capital flight might overwhelm capital account defences. Or, continued reliance on credit-fuelled growth may sow the seeds for crisis by increasing wholesale funding. Indeed, given the history of large debt build-ups a Chinese financial crisis remains one of our largest longer-term macro risks and one which we will keep a close eye on in portfolios.