As discussed in my last blog, we take it as a given that Chinese growth will slow as the economy works through the credit excesses of the last few years. A key question is whether this slowdown will be gradual or abrupt and this, to a large extent, depends on China’s fiscal space.

The government’s official deficit amounts to 4% or so of GDP, but that’s not the whole story. Stimulus is often administered through off-budget vehicles or state-owned enterprises and financed by policy banks. Including these implicit government outlays the deficits swells to about 12.5% of GDP. Part of this is financed by land sales, leaving still 10% of GDP in debt-creating yearly flows.

The stock of debt came to a little under 70% of GDP at the end of 2016, including official and implicit government liabilities.

While these numbers look daunting, they need to be seen against an economy growing at 9% in nominal terms. Consider the following scenario: China increases its deficit by 2% of GDP each year, thereby maintaining growth at 6.5%. In this case government debt would rise from 68% to 105% of GDP over five years. 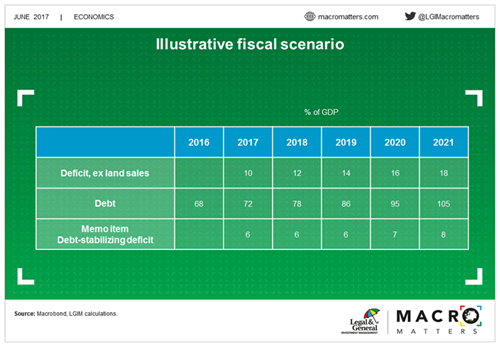 While far from negligible, government debt of around 100% of GDP does not look unsustainable, given China’s size and savings rate. In addition, China has significant state assets amounting to at least 50% of GDP. To be clear, the scenario in the table above is no forecast, but a mere illustration of China’s fiscal space. It suggests that Leviathan remains a force to be reckoned with.