Just like cars, it costs more to maintain an older person than a younger one. Government borrowing could rise by 3% of GDP over the next 20 years as a result of ageing. To offset this, the UK government has squeezed the rest of the public sector in an attempt to balance the books. This seems politically unsustainable. Is the government about to reverse course by ending public sector pay caps?

Emiel and Lars have completely opposite cars. Emiel has a classic Penther Kallista 2.8 litre. Lars has an electric Nissan Leaf. Emiel’s car is expensive to run, not least because “it breaks down a lot”. By contrast, after a large upfront cost for the battery, Lars’ car is very cheap to run and maintain.

Government borrowing could rise by 3% of GDP over the next 20 years as a result of ageing
The cost of running old versus new cars is similar to government payments for old and young people (the chart below shows public spending and tax receipts by age). 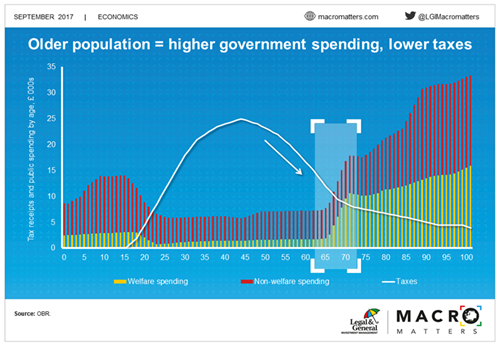 Children are expensive. They don’t earn anything but require health and education spending (and if my son is anything to go by, they keep losing things).

But things improve once they hit their 20s. They pay more in taxes than they receive in benefits.

As the baby and echo boomers retire, public finances are likely to come under increasing pressure

As the baby and echo boomers retire, public finances are likely to come under increasing pressure. We estimate the UK budget deficit could deteriorate by 3% of GDP within the next 20 years as a result of ageing (see ‘Ageing and Wrinkles in the public finances’ Fundamentals article for more details). 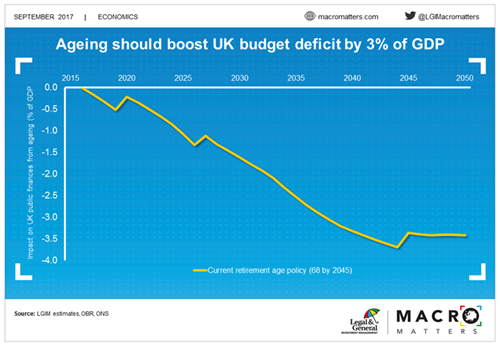 With older people more likely to vote than younger ones, the government has struggled to reduce pension benefits. The Democratic Unionist Party demanded the government keep the pensions ‘triple lock’ and not ‘means test’ the winter fuel allowance in order for it to prop up the government.

Theresa May warned about soaring social care costs in the run-up to the election. But was forced into an ultra-fast u-turn on her disliked ‘dementia tax’.

The pension age is being increased, but at a glacial pace.

So in an attempt to balance the books, the government is instead squeezing other parts of the public sector. Pay has been restrained, non-pension benefits cut, education fees increased and the NHS rationed. I’m not convinced these polices are politically sustainable.

It’s like pushing a car up a hill. With demographic pressures getting worse every year, as soon as you stop tightening fiscal policy, the deficit will deteriorate again, taking you back to square one.

After a difficult election and the party conference approaching, is the government about to change course? Reports suggest the government is about to ease the public sector pay cap.

Over the past decade, fiscal policy has been tight while monetary policy has been loose. This has widened wealth inequality. Can it carry on? Perhaps we’ll see a change in policy mix over the next decade.