Recent Brexit news is neither surprising nor likely to be the end of this story.

“Brexit will now dominate markets for a while longer and be a market factor for years to come.” So wrote my colleague, Lars, the day after the UK voted to leave the EU. More than 1,500 days later, much has changed – not least the government – but the sentiment remains just as valid today.

Among many geopolitical risks, Brexit – for Europe at least – remains a rather large and time-consuming one. More than four years since the referendum, the UK is still working out what it wants and what it is willing to give in return while gauging the EU’s willingness to compromise.

The result of last year’s UK election reduced the probability of a soft Brexit outcome, in our view. Since then there has been no real progress in discussions with the EU, so the chances of a comprehensive deal have dwindled further.

The latest developments – the publication of the Internal Market Bill by the UK government, which in some areas breaches the Withdrawal Agreement, as well as the news that the UK state-aid regime will not be ready until mid-2021 – further lower the likelihood of securing a deal. Barring a parliamentary block, a U-turn in policy, or a significant softening from Brussels, this means we are probably now looking at a narrow range of outcomes between a hard exit and a slightly less hard exit (that is, one that largely avoids tariffs).

The difference in economic impact between the two possibilities for the UK is relatively small, and will most likely be swamped in the current environment by COVID-19 dynamics and fiscal and monetary policy. The growth impact for the EU as a whole stands to be even smaller but concentrated in some trade-exposed countries such as the Netherlands and Ireland.

Is all this news particularly shocking? Not really. Negotiations with the EU have been going back and forth for a while, but investors have woken up to Brexit risks again in the past few weeks. With the market probability of a no-deal exit increasing, sterling recently fell by around 4% against the euro and US dollar. 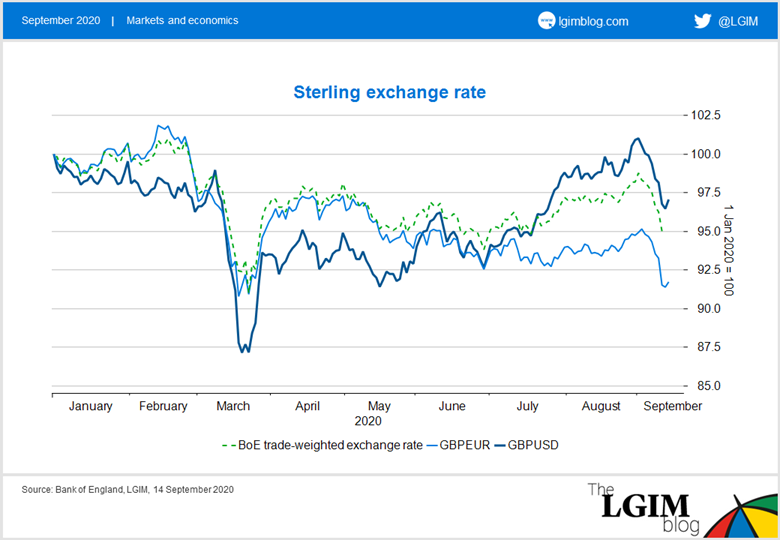 Looking forward, the narrowing Brexit outcomes should mean the pound’s range is more limited too, so we wouldn’t expect the wild swings in the currency of recent years. We believe the tail risks are also skewed to the upside from here: a no-deal scenario may see some weakness, but a sniff of a deal could stoke a greater recovery.

The events of the past week are sad news for those who are by now bored of Brexit. Even as the transition deadline at the end of the year approaches, many of my colleagues expect we will still be talking about how to leave the EU for several more years to come after we’ve ‘left’.