For trucks’ sake: Brexit and the outlook for UK assets

How have Brexit and the post-virus economic contraction affected the prospects for UK asset prices?

The latest roadblock in the Brexit negotiations is, appropriately, haulage. The UK is reportedly seeking access rights for British truckers that are similar to those available through the single market, but Brussels is reluctant to accede.

This is far from the only topic on which the two sides remain considerably more than socially distanced. Negotiators also appear far apart on the Northern Ireland Protocol, the level playing field, governance, and several other issues.

Our current expectation is that even if a deal is reached, it will be a ‘bare bones’ one, largely avoiding tariffs. That still constitutes quite a hard Brexit and leaves the services sector without a deal in place and subject to significant non-tariff barriers like regulations.

Amid this uncertainty, the UK is attempting to recover from a major economic contraction following the COVID-19 lockdown. The country’s gross domestic product (GDP) fell by 20.4% in the second quarter of 2020, nearly 10 times the magnitude of the drop in the fourth quarter of 2008 and the country’s worst-ever decline in a single quarter. It was worse than any European nation or the US in the second quarter.

The severity of the downturn can in part be explained by the economy’s higher exposure to services and construction-orientated activities. Similarly, the underperformance of UK equities comes in part from compositional effects. Specifically, UK equity benchmarks have a higher exposure to the energy and financial sectors that have been hard hit, and lower exposures to technology stocks which have been the winners.

Yet this underperformance cannot simply be attributed to the unusual circumstances of a single quarter; it’s a trend that’s been going on for years.

Prior to the virus, this was in part due to a political risk premium coming from the possibility of an extreme left-wing government under Jeremy Corbyn, on top of the obvious and ongoing Brexit situation. These risks effectively meant the UK was considered ‘un-investable’ by many international investors.

While the Corbyn risk has dissolved, the Brexit risks discussed above remain significant. Indeed, Brexit-related news flow has arguably been notably worse than many would have expected after the 2019 election.

Consequently, slower investment and higher trade frictions and uncertainty make us cautious about the UK’s growth prospects beyond the immediate virus-related bounce.

While economic momentum looks positive in the short term – with the latest data running in line with our more optimistic scenario, as the chart below illustrates – the recovery is likely to lose steam as unemployment rises, fiscal support eases, and the Brexit process continues. By the end of 2021, we therefore still expect there to be an economic shortfall compared with the pre-virus trend. 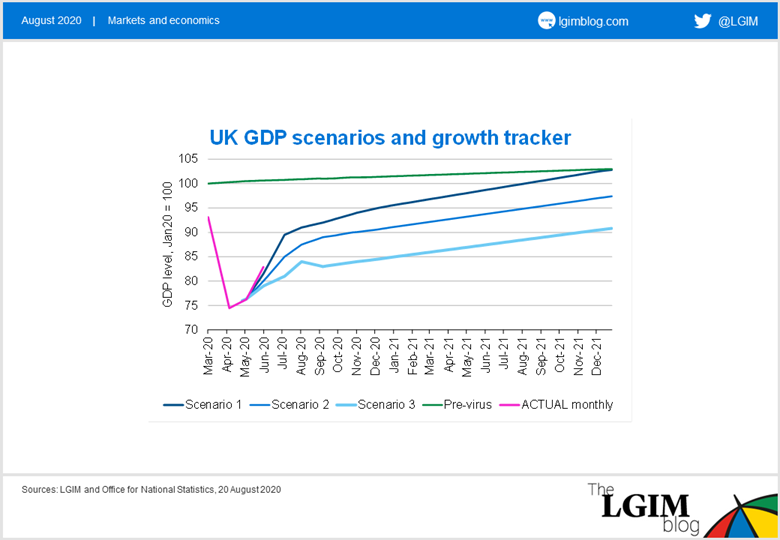 Please click here for an explanation of our economic scenarios

The labour market remains key; we see unemployment rising to 10% by the turn of the year and only drifting down slowly in the years that follow. That may lead investors to believe the Bank of England will pursue negative interest rates but we continue to think that is unlikely given the unique challenges of the UK economy and banking system, unless there is a significant double-dip recession.

So what does this mean for UK assets? A sharp move higher in gilt yields last week prompted us to take another look at our negative outlook for UK bonds, but we have chosen to stick with that view and expect yields to continue moving higher.

As for UK equities, we do have a penchant for unloved stocks at the moment, but not these ones. UK equity valuations do look attractive across most measures, and the de-rating that has occurred since 2016 can be tied more closely to political risks rather than relative earnings or dividend disappointment, but regardless of domestic news the sector composition means the fortune of UK equities is somewhat dictated by global economic developments. A faster recovery from the pandemic may breathe some life into lagging sectors, but we aren’t expecting an economic boom and the energy sector may need more time to recover from clear overcapacity in oil markets.

Finally, further Brexit brinkmanship may bring back sterling volatility. Many of our portfolios have reasonable amounts of overseas currency exposure, meaning weakness in sterling can act as a performance tailwind.