The spread of new coronavirus variants, including the one first identified in India, could slow the speed at which countries can reopen their economies.

Just as the UK began opening up for indoor activities, the country was hit by a new variant of COVID-19 first identified in India.

• It’s unclear if it is resistant to vaccines.

This could make herd immunity even less likely and so pose a threat to those who are vulnerable and unvaccinated, who are concentrated in ethnic minority groups. This leads us to believe the government is likely to pause the reopening measures planned for June until it can assess the data.

At the time of writing, B.1.617’s share of infections is 20% – up from 8% a week ago and 3% a fortnight ago. It is particularly prevalent in the North West of England, Bedfordshire and London, but is spreading across the South East and South West. It’s not possible to contain it by closing off a couple of towns, in our view, and you can see an up-to-date graphical overview here.

Is it resistant to vaccines?

The key is whether it is resistant to vaccines. I had expected a ‘vaccine resistant’ strain to become dominant over the summer as vaccines kill off weaker variants. It has a mutation at the E484 spike protein, just as its “Brazilian” and “South African” cousins do. The E484K mutation has demonstrated resistance to some vaccines (particularly AstraZeneca’s), but this variant has a E484Q mutation instead.

The jury is still out on this. In Bolton (one of the most severely affected regions), cases among the young (0-59 year olds) have risen at a much faster rate than among the old (60+). This could reflect the positive effects of vaccination, or it could reflect data lags and a lower starting base of infections. On a log scale (where each line represents a doubling of cases), we are seeing rapid growth in the 60+ community. 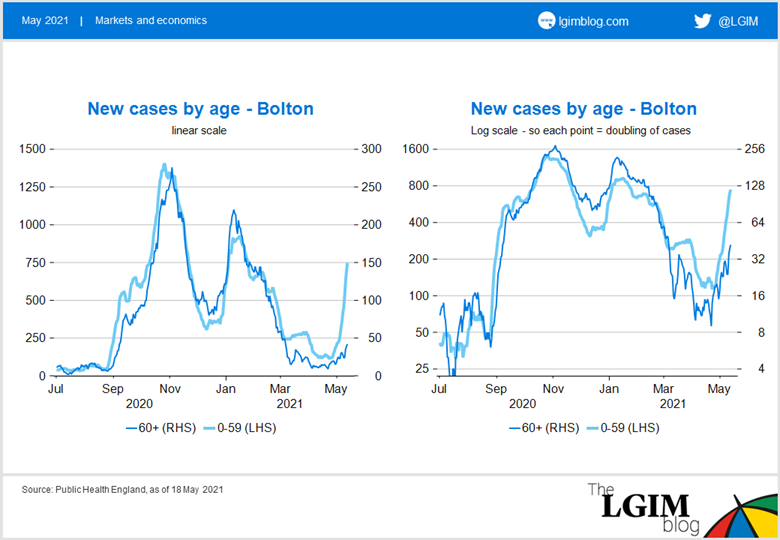 But in terms of government policy, we believe it’s hospitalisations – not cases – that really matter. Mass testing within clusters will inevitably pick up mild cases, even among the vaccinated, but so far hospitalisations remain low. However, as it can take some days for severe symptoms to develop, the reporting of infections that have worsened to require hospital admission tends to lag the recording of case numbers. We’ll need to watch this space. 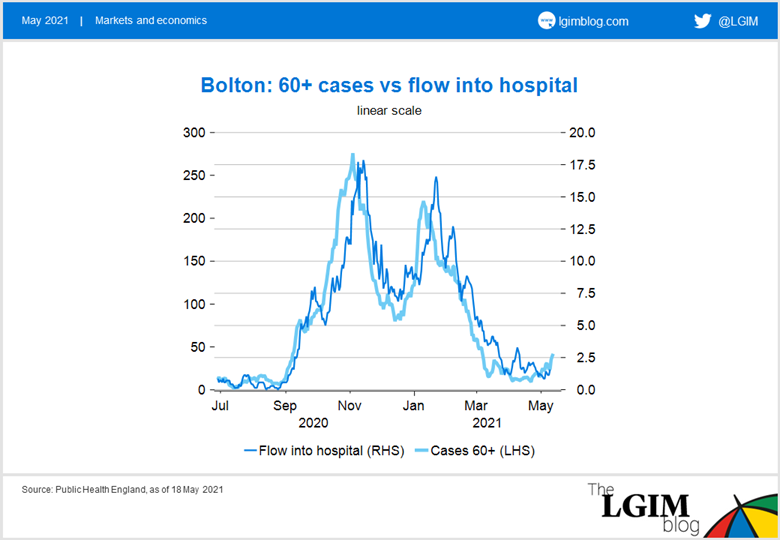 The faster growth rate of the “Indian” variant makes herd immunity even less likely. This explains why the government is accelerating second doses for older people, rather than giving first doses to younger people. At a societal level, we also need to tackle the large disparities of vaccine take-up across ethnic minorities.

Impact of the surge in cases

Vaccine take-up among elderly cohorts ranges from around 97% amongst white communities to 87% among South Asians and just 73% among black communities. A much more infectious virus combined with reopening would lead to a surge in cases, threatening the unvaccinated vulnerable.

It’s unclear at this stage what happens to the vaccinated vulnerable. If vaccines provide 100% protection against serious outcomes, then infection rates could explode among the population with theoretically limited consequences. But if vaccines are not ‘bullet proof’, then we return to the usual socioeconomic trade-offs.

We therefore believe the government is likely to pause June’s full reopening until it has more conviction either way.