vaccine how quickly can economies reopen

There is currently mixed news on the virus. Cases in the UK are accelerating thanks to a mutation that makes the virus easier to transmit. But vaccinations have also begun rolling out in the UK and other countries. Hopefully the new mutation will not be resistant to vaccines.

It is estimated that 10% of the population can be vaccinated per month. This suggests it could take until the second half of 2021 until we can reach ‘herd immunity’ and safely return the economy to ‘normal’.

However, because the virus disproportionately affects older and other vulnerable members of society, politicians could re-open the economy much sooner once those members have been protected.

Politicians have an unenviable task trying to protect both society (health and education) and the economy.

If they want to minimise infections, they’d have to keep the economy locked down until a sufficient number of people have been vaccinated such that the virus struggles to find new hosts to infect.

So, if the baseline reproduction rate of a fully-reopened economy but with more social awareness (e.g. washing hands) was 2.5…

… you’d need more than 60% of the population to be immune either from vaccination or from previously catching the virus to push the R below 1.

The lower the vaccine efficiency, the greater share of the population you need to vaccinate for the same immunity effect. Thankfully, the early vaccine candidates appear to be >90% efficient.

Waiting for herd immunity from vaccinations involves a substantial economic cost. Given the vulnerability to the virus is heavily skewed, politicians could instead choose to re-open economies much earlier.

The weakest quarter of the population (e.g. those aged 60+) account for 95% of deaths and 2/3 of hospital and ICU visits. 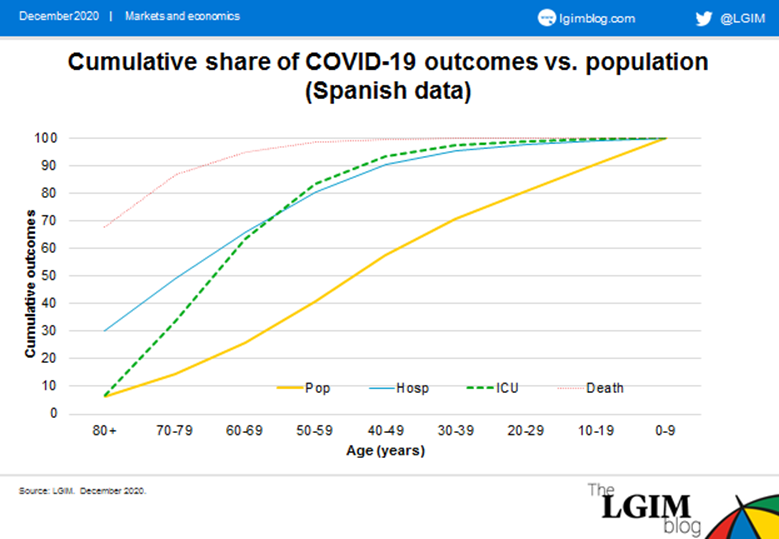 In a stylised world where you begin targeted vaccinations at the same time as you re-open the economy (with 100% vaccine efficiency), you would cut deaths by 94% and ICU visits by 72% compared with a no vaccine re-opening.

That’s still an awful lot of ICU visits. But if you waited just one month before re-opening, you would cut ICU visits by 93% and so on.

In reality, politicians are likely to seek a middle ground, not least because the vaccine is not 100% efficient and some of those vaccinated will unfortunately become ill. So, they will likely keep the most dangerous places restricted until the spring (indoor mass events, bars / restaurants, encourage online learning). Respiratory viruses tend to fall from March as the warmer weather encourages us to go outside. By then, we should have vaccinated 30% of the population – the vast majority of vulnerable patients.

Politicians could then taper restrictions. The economy would be stronger than if we waited for herd immunity. We would, however, see a surge in cases amongst healthier cohorts, but the vulnerable members of society would have been protected. 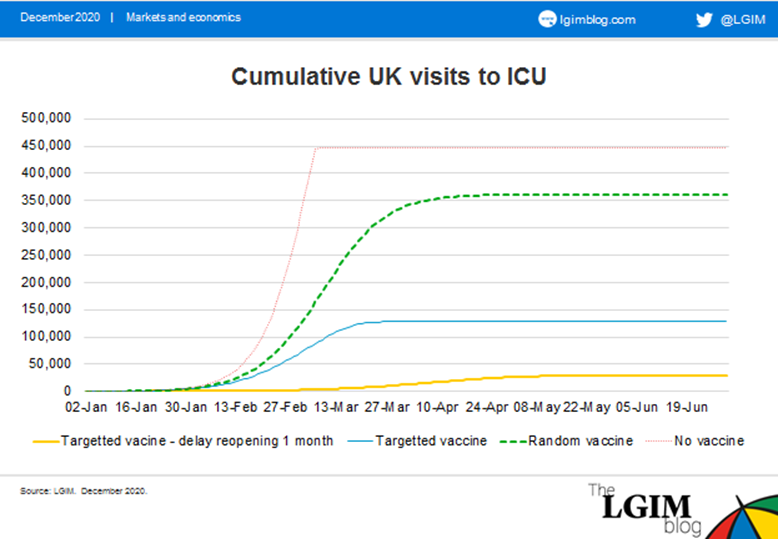