Our analysis finds the coronavirus is becoming more prevalent in several major states that are nevertheless continuing to ease their lockdowns.

Four weeks ago, I shared our team’s work on how encouraging developments in the aggregate numbers of COVID-19 cases in the US were obscuring more alarming trends in individual states.

At that time, we warned of “the likelihood of a second wave of COVID-19 hitting the US in the weeks and months ahead”. We are sadly now starting to see evidence of this increase in virus cases.

No matter how you cut the data – be it case numbers, ratios of positive tests, or hospitalisation rates – there are several key states where the virus is becoming more prevalent. 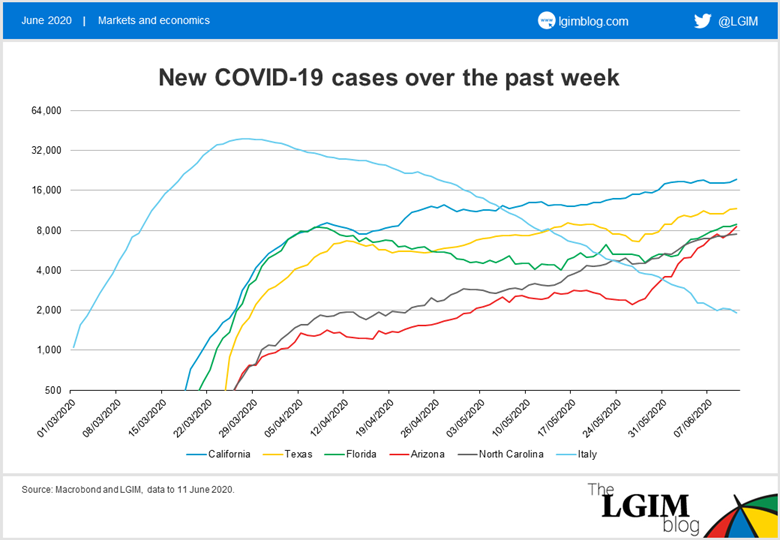 The chart above shows a worrying rise in new cases in several states, though only Florida seems to be experiencing a second wave. It appears the others never truly contained the ‘first wave’ in the first place.

Some have argued that the case load has climbed simply because testing has become more common.

We looked into this on a national and state-by-state basis. The chart below shows the US did ramp up its testing capacity from mid-April. As they were no longer testing mainly people with acute symptoms, but a broader section of the population, the proportion of positive results (or ‘hit ratio’) fell rapidly from 20% to 5%. Put differently, one in five of those tested had the virus when there was limited availability of the kit; now, only around one in 20 tests are confirming infection. 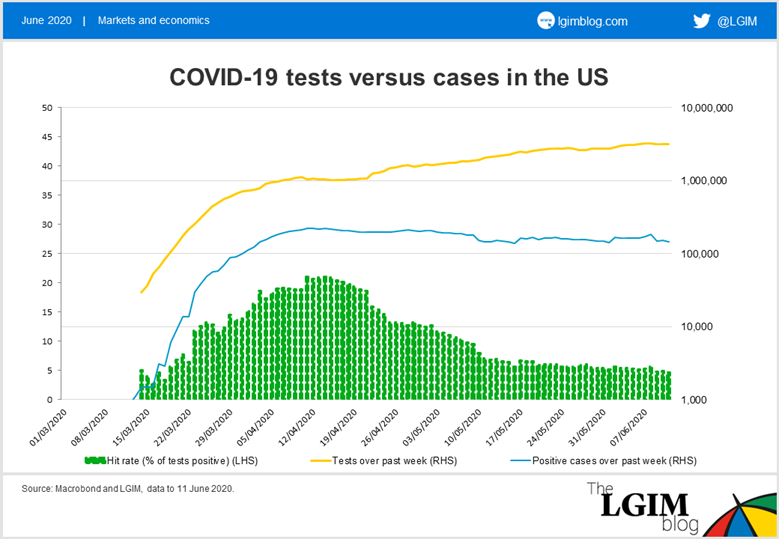 A hit rate of 5-10% is consistent with the authorities having adequate testing capacity. Nationally there is no evidence of a spike in testing in recent weeks. This is reaffirmed on a state-by-state basis. Instead of seeing ‘falling’ hit rates in the ‘second-wave’ states highlighted above, hit rates have actually been rising. This seems consistent with a genuine increase in virus cases rather than more aggressive testing, which would reduce hit rates.

Overall, then, we see clear evidence of a rising virus trend in states like California, Texas, and Florida.

No time to relax

Worryingly, the situation may not improve any time soon. The level of economic and social activity in these states in recent weeks (which we track with alternative data like this) has been consistent with a rising virus trend. As these restrictions continue to be eased, we would expect an acceleration in the spread of the virus. And because there are no hard borders between individual states, this would in turn increase the risk of the virus spreading from these regions throughout the entire country.

According to the official White House protocols, states should only re-open if they are displaying either a “downward trajectory of documented cases within a 14-day period” or a “downward trajectory of positive tests as a percent of total tests within a 14-day period (flat or increasing volume of tests)”. California is borderline on those criteria, but they are clearly not met in Texas or Arizona. Nonetheless, all the states mentioned above moved to “phase III reopening” earlier this month and the latter lifted most restrictions in the middle of May.

A prolonged ‘second wave’ of the virus in the US would first and foremost be a human tragedy. But as investors we must also be aware that these trends matter to markets if they result in a reintroduction or extension of economic restrictions, or people simply stay inside anyway out of caution.

Either scenario would adversely affect the economy and corporate earnings. The equity market seemed to acknowledge some of this risk in weakening last week, but this narrative of a second wave could have much further to go if this becomes the consensus view.