The disunited states risk a second wave of COVID-19

The evidence suggests that some states in the US are easing their lockdowns before they have passed peak coronavirus levels.

This week, shops and restaurants across Italy will begin opening again as one of Europe’s strictest lockdowns is eased. Such moves, and the falling number of new COVID-19 cases that has given the Italian authorities the confidence to re-open the economy gradually, are to be welcomed.

But we must remain acutely aware of the risk of second waves of the coronavirus if restrictions are relaxed too quickly, and in this regard we are concerned about developments in the United States.

One metric we have found useful in monitoring the extent of COVID-19 outbreaks is hospitalisations, which we believe offers the best mix of reliability and timeliness. Infection-rate data are distorted by the number of tests undertaken, while fatality rates are lagging (an average of 24 days after infection). By contrast, admissions to hospital typically occur 10 days after infection and, as they measure only extreme symptoms, are less dependent on testing rates.

Looking at hospitalisation trends, then, superficially it seems that America is experiencing the same respite from the virus as Italy. 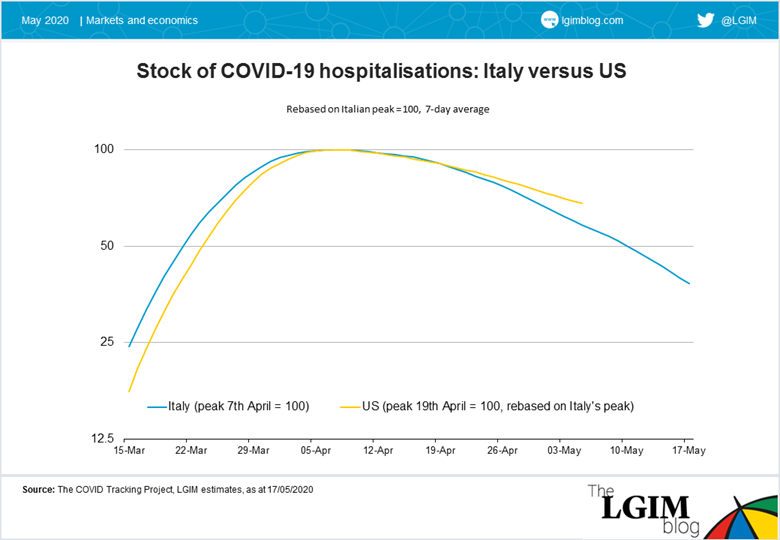 This implies that the US is improving but at a slower pace than Italy did. However, we must not make the mistake of presuming that the US is a homogenous entity subject to uniform lockdown measures. This point is made clearly by the chart below, which shows what happens to the number of hospitalisations in the US when New Jersey and New York state – where stay-at-home orders have been among the strongest in the country and in place for longer than elsewhere – are removed from the aggregate total. 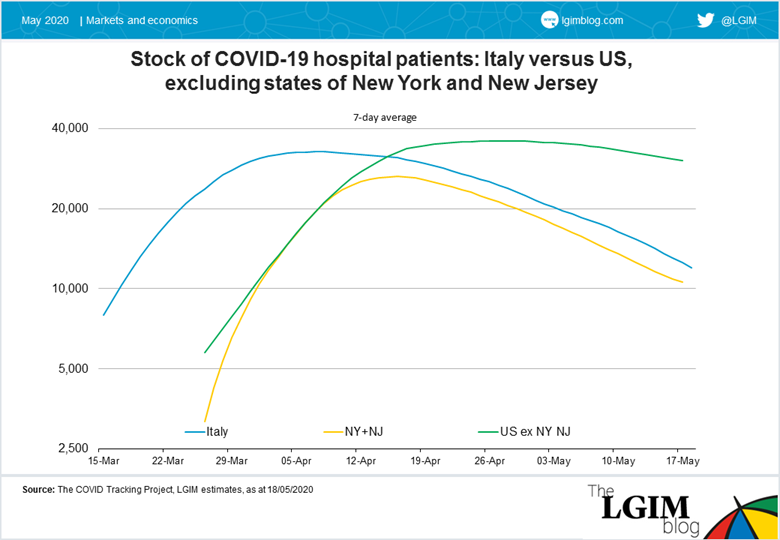 As we see, New York and New Jersey continue to track the Italian experience. There is a decline elsewhere, but it’s very slight. The number of hospitalisations in the rest of the US has not yet started to fall meaningfully, in other words; the virus is not under control through much of the country.

The same pattern is evident if we look at the flow of new hospital cases, rather than the stock of hospitalisations. Once more, the overall flow trend – based on data from 26 states – is encouraging. 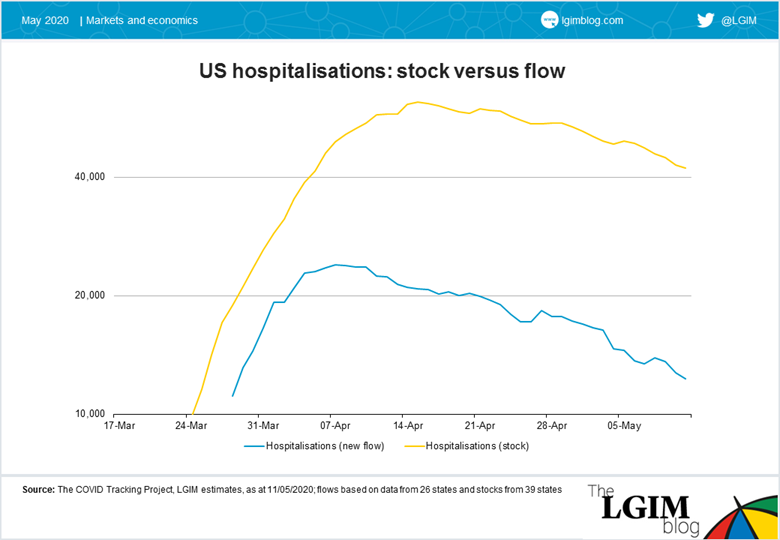 The underlying data here are noisier, but when you isolate New York it tells a similar story of a rapid fall in that state but only a slight improvement elsewhere. Extremely high numbers of people continue to be admitted to hospital in the US, as we see below. 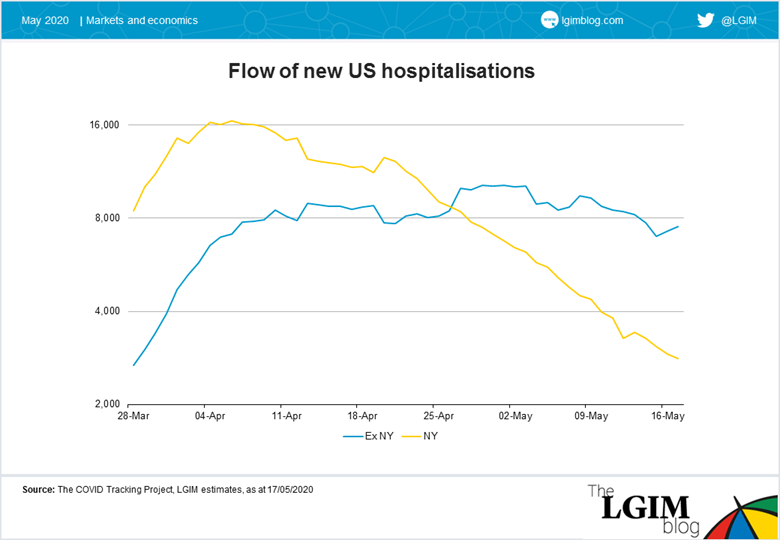 We must acknowledge that the data provided by many states are poor, so we don’t have a perfectly accurate picture of how the virus is spreading in America.

What we can see, though, is concerning. New York and some other states may have passed peak levels of COVID-19 infections, and a gradual easing of restrictions there may be justified. But many other states do not appear to be beyond the worst of their outbreaks, even as they relax their own lockdowns.

We should not take false comfort from the positive signs in ‘early easers’ elsewhere, either. In the likes of Austria, Korea and Germany, there have been some localised incidents following the lifting of lockdowns but there is no material evidence yet of full-force second waves of the virus.

Importantly, however, these countries all had some degree of contact tracing and manageable caseloads when they pared back their restrictions – unlike the US, where active cases per capita are running around five times higher than they were in the early-easing countries at the time they began to unlock.

Yet states are free to ignore this advice, and plenty are doing so. Texas does not meet either of the two criteria above, for example, but nevertheless allowed shops, restaurants, cinemas, and malls to reopen at the end of April, albeit with lower occupancy levels. The chart below shows that while hospitalisations have not spiked in the state since then, they have continued to drift higher. 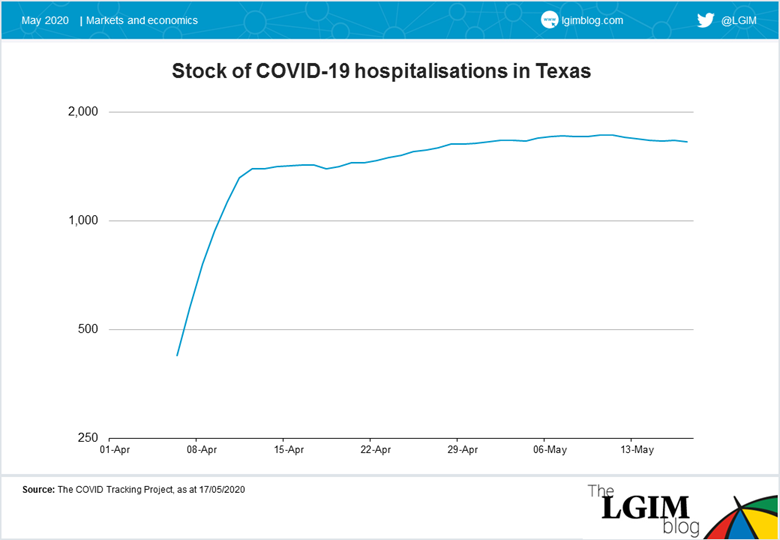 Given what we know about how infectious this disease is, any steps to ease the lockdown before the peak of the virus is well behind us seem risky.

We must therefore prepare for the likelihood of a second wave of COVID-19 hitting the US in the weeks and months ahead.