Emerging economies struggled to raise cash at the start of 2016. The Fed had just hiked interest rates in December 2015 and its ‘dot plots’ suggested it would continue to hike rates once a quarter thereafter. Commodity prices collapsed and corporate borrowing costs surged.

There was a vigorous debate across the firm as to whether a global recession was imminent or if policymakers could keep the show on the road. My Fundamentals note “Stressed Out” concluded that the Federal Reserve should “act cautiously if financial markets remain volatile”.

The Fed heeded this advice and kept rates unchanged. Meanwhile, other central banks pumped more money into the system. The ECB, Bank of Japan and most recently, the Bank of England, cut rates further and bought more assets, including corporate bonds.

This seems to have done the trick. There was a significant improvement in the latest quarterly EM Bank Lending Survey by the IIF (Institute of International Finance). 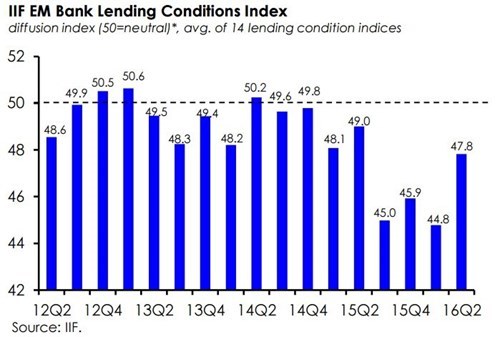 A huge improvement in funding conditions (chart below, yellow line) offset a still-rapid deterioration in non-performing loans (dark blue line). The end result being that the key credit standards variable (red line) returned to its long-term average. Our previous empirical research suggests this will support economic growth in coming quarters.

The survey cited an improvement in foreign funding and emerging market capital flows. The chart below shows how money flowed back into emerging markets in the spring as the ECB stepped up its bond purchases and the Fed paused its tightening. 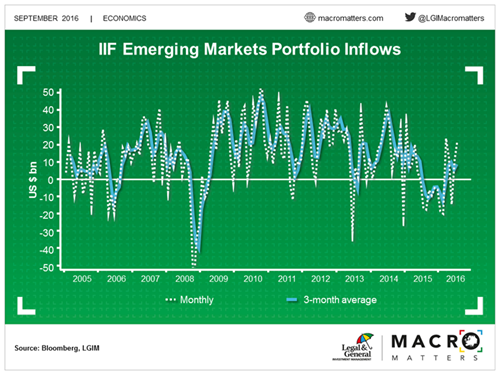 Recessions are typically caused by policymakers deliberately tightening policy to fight inflation. An acceleration in US wages caused by record-low unemployment could trigger this scenario.

But until we get that inflation threat, it’s unclear when the next recession will be. Indeed, the current focus is on uncomfortably low inflation which is why policymakers have shown a willingness to literally throw money at any problem. This seems to be having a positive spillover into emerging market bank lending conditions. However, it is also why as conventional quantitative easing reaches its limits, attention is increasingly turning to more radical approaches including helicopter money.

So it seems that money does indeed talk, at least for now...