So what exactly is ‘helicopter money’?

Over the past few weeks we have frequently debated the likelihood of 'helicopter money'. However, I have noticed that people tend to use the term to mean many different things. What some people call a helicopter, other people would hardly call a drone. In light of this I think it might be helpful to answer the question: what does helicopter money really mean?

This needs a little explanation. By permanent, we mean that governments and central banks give a clear message that the money doesn’t need to be repaid by the taxpayer.

Why is permanency important?

Because economic theory suggests that when a government tries to stimulate an economy by increasing debt-financed government spending, demand remains unchanged. This is due to the fact the public saves its excess money to pay for expected future tax increases that in turn will be used to pay off this additional debt. This theory goes a long way to explain why all the stimulus in Japan hasn’t really helped but has mainly increased peoples savings instead.

Today’s increasing fiscal spending, alongside QE from central banks is not exactly helicopter money. But we are clearly getting closer

In terms of the mechanism, time-stamped vouchers are often talked about. But the risk is that consumers will use them as a substitute for planned expenditure, resulting in increased saving, not spending. Government spending on infrastructure or hiring would make a direct contribution to aggregate demand, but would require co-ordination with central banks.

In practice, helicopter money is likely to be an incremental process. 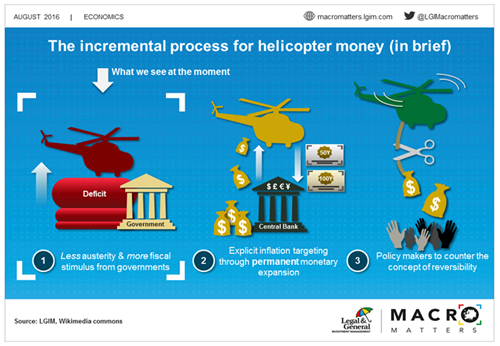 It starts with governments implementing less austerity and considering fiscal stimulus. This is what we see at the moment. Central banks considering explicit inflation targeting is a step forward as well. Fed Governor Williams hinted at that this week. Then there could be an attempt by central banks to make monetary expansion permanent, such as buying 50 or 100-year bonds with an intention to hold them until maturity.

Crucially, finance ministries would have to be willing to spend this money and not signal that they would attempt to claw it back in the future. In principle this would be a key departure from existing quantitative easing and would require a cultural change in developed market financial policy making. For instance Japan, which is seen by many as being the closest to helicopter money, still discusses their fiscal stimulus as if it's temporary; the BOJ talks about QE as something they expect to reverse at some point.

Policy makers will need to counter this concept of reversibility. For instance they could start to redefine debt so it excludes central bank purchases. Central banks could explicitly write off debt they hold on their balance sheet or buy perpetual zero coupon debt from the governments (if you buy something which is perpetual and doesn’t require interest to be paid on it, you basically give your money away).

This is a cultural change. However, it shows some of the risks around helicopter money as well. We have little doubt whether helicopter money can create final demand and inflation. But we fear it could work too well and politicians might get addicted to it. Starting it could be relatively easy, stopping it might be impossible. How do you change the culture from deliberately inflationary spending, a politicians dream, to prudently balancing the books, the moment you have hit your policy targets?

Today’s lenience towards increasing fiscal spending, alongside quantitative easing from central banks is not exactly helicopter money. But we are clearly getting closer. For helicopter money to become reality, there needs to be a joined-up effort between central banks and governments that becomes institutionalised.

This could mean signalling policy as being likely to remain in place until hit inflation targets are hit, and / or communicating in a way where policymakers start to redefine net debt to exclude certain central bank purchases. This would help the idea of coordination and permanency.

See here for our original discussion on the prospect of helicopter money.