Just can’t get the staff nowadays

US unemployment is still relatively high, yet there are record job openings and reports of widespread labour shortages. So how tight is the US labour market?

The recent rise in US inflation has been striking, but we had previously flagged the risk of a jump in price levels as the economy reopens. So perhaps the bigger surprise has been the increasing signs of labour shortages when the economy is still far from pre-pandemic employment levels. If people fail to return to work, the US economy will hit full capacity sooner and risk setting off a wage-price spiral. 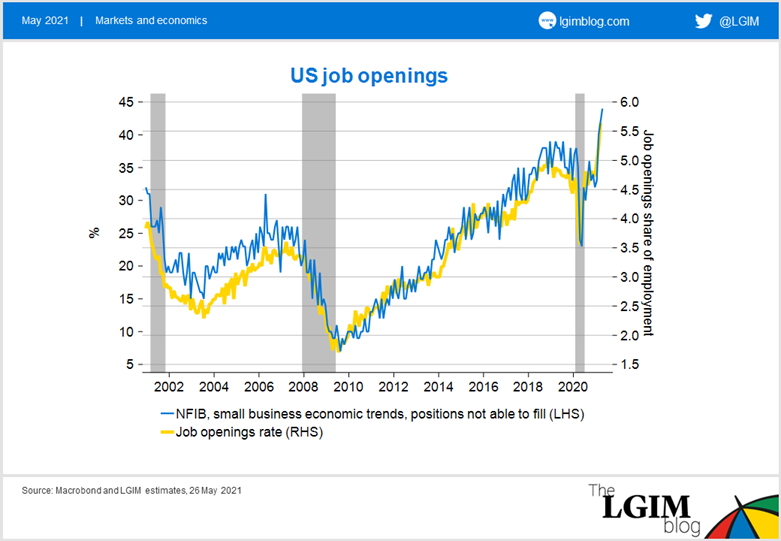 So, what is going on? The recent Federal Reserve (Fed) minutes cite four reasons:

There is evidence to support all these claims. For example, a recent Fed study found that 9% of parents were not working because of disruptions caused by the pandemic. This unexpected pandemic-related need for childcare particularly affects mothers and translates into nearly two percentage points fewer adults working overall.

Surveys also suggest there are still concerns around COVID-19, despite good progress on the vaccination roll-out, and the Pew Research Center found the pandemic appears to have acted as a catalyst to bring forward retirement.

But the most controversial possibility is unemployment benefits. These were extended to September as part of President Biden’s $1.9 billion American Rescue Plan. Not only do they include an extra $300 a week on top of state unemployment benefits (which typically runs at around 50% of the lost wage, although benefits vary by state) but the support massively expands eligibility (gig workers, the self-employed, those with patchy employment history, etc) and drops the normal requirement to be actively seeking work.

The continuing claims data across the various programmes show that around 16 million people are currently receiving these benefits. Pre-pandemic, there were fewer than two million continuing claims.

Are these benefits now doing more harm than good in acting as a disincentive to return to work? Republican state governors seemed to think so; Fed research is inconclusive. A blog from the San Francisco Fed last summer argued that the impact is limited, but recent survey data from the New York Fed indicates the reservation wage (below which people are disinclined to work) has jumped for those earning less than $60,000 a year.

All 23 Republican-controlled states are now set to end the $300-a-week unemployment benefit enhancements early, between mid-June and early July. This accounts for a population of 134 million (out of the total US population of 332 million) and about a quarter of all those on benefit. Some are even using state money to fund return-to-work bonuses.

Furthermore, most of these states are also cancelling the expanded eligibility and will now include the need to actively search for work to claim state unemployment benefits. So there is potentially a large increase in labour supply and employment ahead, starting with perhaps as many as four million people over the summer and then even more in September/October when nationwide support ends across the remaining states.

The fiscal savings from ending these benefit enhancements a few weeks early are relatively small, at only 0.1% of household disposable income. But it matters a lot for payrolls and the Fed’s substantial progress metric, and therefore matters a lot for the tapering debate. Timing when payrolls surge is tricky because the payrolls number itself will be the most timely data, as the weekly continuing claims by state lag by four weeks. Texas will be worth tracking, given the size of its population of 29 million; its benefits expire on 26 June, so late July should give an early indicator of the impact.

My view is the transitory nature of the inflation spike also extends to the current labour-market tightness. I expect a surge in labour supply over the summer and autumn to virtually eliminate the current shortfall of eight million jobs from pre-pandemic levels by the year-end.

But 2022 looks different. If labour participation does not continue to pick up, unemployment could fall to extremely low levels. As next year progresses, the Fed could be confronted with a very tight labour market and more genuine wage pressures.

The next debate will be whether higher wages lead to higher prices or mainly a squeeze on margins. The risk in this expansion is that policy is too accommodative and demand will remain strong, aided by the excess savings buffer. This could allow for greater pricing power and inflation.