We need to talk about inflation

The first inflation test is fast approaching. The economy and the Fed’s new framework should pass, but next year could be much more challenging.

So far, though, we don’t think there has been anything in the actual consumer price data to be concerned about. The core consumer price index (CPI) in the US only rose by 1.3% year on year in February.

However, we believe this is about to change. Energy prices will boost headline inflation, but the Federal Reserve (Fed) is also warning about an imminent and temporary flare up in core inflation. Could it ignite into something more serious?

Few are concerned that the Fed would allow inflation to burn out of control, despite the apparent monetary tinder. Instead, the fear is the support for asset prices over the past decade could go into reverse if the Fed suddenly has to withdraw the excess stimulus feeding the inflation flames.

How significant is the near-term inflation threat? The base effects are well known, as is that some depressed prices such as airfares and hotels will normalise as the economy reopens. Providing that the latter occurs over several months rather than in one pop, we would only expect core inflation to peak at around 2.5% year on year in May or June, as shown in our baseline forecast (which also contains the wide uncertainty bands). 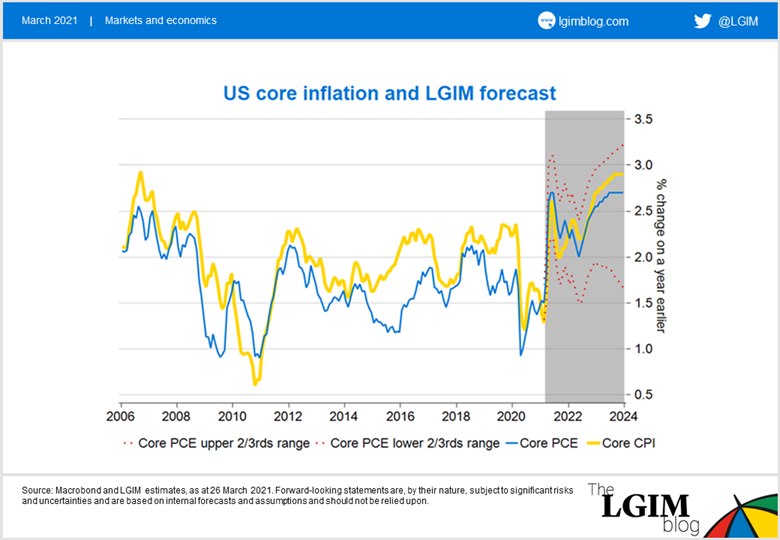 The new information in recent weeks has been the further rise in commodity and shipping prices, and supply disruptions in ports and the semiconductor industry. Lean inventories and lengthening delivery times could add to the near-term spike, especially if retailers have increased pricing power as consumption surges on the back of $1,400 rebates. With some prices overshooting, it is not implausible that core inflation could even reach 3%.

Beyond the near term, base effects should go into reverse over the summer. Some of the supply-chain issues should dissipate too. There are also a number of slow-moving components in the inflation basket due to lags in measurement. Rents, which represent 40% of core CPI, will likely be depressed until next year due to rolling samples of contracts only being renewed once a year. This is even as new lease prices are already beginning to pick up.

But the inflation reprieve could be relatively short lived if the vaccines are effective in containing the virus as expected. While the speed of the jobs rebound is uncertain, it is possible that growth is so rapid that the US returns to full employment in 2022. If participation rates don’t fully recover, this could happen even sooner.

That could vindicate the policy stance since running a high-pressure economy is one way to boost the employment rate, pull in more marginal workers, raise wages and tackle income inequality. Indeed, Fed chair Jay Powell at the March Federal Open Market Committee press conference was keen to distinguish between a wage Phillips Curve and a price Phillips Curve. The Fed wants to find the upward slope on the former while believing the latter might continue to remain relatively flat if wage increases are absorbed in company margins.

Much hinges on inflation expectations. An interesting blog from the New York Fed suggests that the Federal Reserve has become even more credible in recent years. If overheating concerns begin to un-anchor inflation expectations, the Fed might need to react to maintain its credibility. This is the lesson from the 1960s. It took a sustained large positive output gap to raise inflation, but the process proved non-linear. Chaining our forecasts onto Congressional Budget Office estimates, the output gap could be heading for a replay of that era.

In addition, structural disinflationary forces have helped to keep inflation low even as unemployment fell in recent years. However, there are signs some of the downward pressures on inflation from globalisation, deleveraging and demographics might be starting to reverse, just as the cyclical pressures become the strongest in decades.

The imminent spring inflation bounce is likely to prove transitory, followed by continued strong growth and easing price pressure. But later next year could be a sterner challenge for the Fed and financial markets.