As Greece's five-year bond yields trade below those in Italy for the first time since the European sovereign debt crisis, we discuss the case for continued exposure to the Hellenic Republic.

For many years, Greece has had the highest sovereign yields in the Eurozone. The aftermath of the largest sovereign default by any country in history, in 2011, made investors wary of extending credit to the Greek government. The country required multiple bailouts and came dangerously close to leaving the Eurozone in 2015.

Time flies, but it also heals.

Almost exactly a year ago, I wrote a blog on Greece arguing that "the rot has stopped". Since then, the Greek economy has continued to recover. The unemployment rate has fallen another two percentage points over the past 12 months and, amid the recent bout of weakness in European manufacturing data, Greece has been the positive outlier. The Greek manufacturing purchasing managers’ index is just about the only one in Europe above 50. It has been resilient to the global downturn thus far this year, driven primarily by local factors such as the improvement in sentiment under the new government.

Greece’s current account deficit also remains close to zero, which in turn limits the country’s borrowing needs. There are a few small debt repayments due in the next few quarters, but then nothing until 2022.

Of Greece’s €358 billion of debt, less than €70 billion is owed to private creditors. The rest are long-dated loans to public entities, mainly to other European countries through various bailout funds. Only €52 billion of the debt owed to the private sector has a maturity of more than one year. And almost all of the bonds fall due before the loans to the public sector: 90% of the bonds mature before 2037, and less than 10% of the loans. The loans not only provide subsidised financing to the Greek government; they also massively reduce the refinancing risk faced by private investors.

The new government has pushed through some tax cuts on real estate, but nothing that knocks Greece off the path agreed with its creditors. Moreover, the collapse in interest rates – and expectations of future interest rates – directly helps the country’s fiscal sustainability metrics given that so much of the debt is linked to EONIA (euro overnight index average).

Indeed, as Greece’s credit metrics improve, there’s an increasing chance that its sovereign rating could eventually be upgraded to BBB and so become eligible for the European Central Bank’s asset purchases, which would then gobble up at least a third of the country’s outstanding bonds. 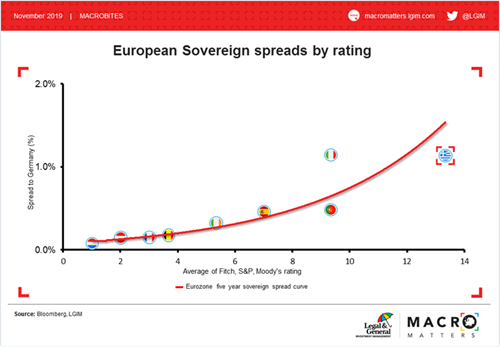 A number of our portfolios retain exposure to Greek bonds and have benefited from a rally that’s seen five-year yields fall below Italy’s, despite the BB rating. We’re not ready to exit them yet, and we believe Greece’s low refinancing needs justify the relative yields.