Greece: The rot has stopped

The Greek economic collapse was far deeper and far longer than anyone anticipated. However, there is more and more evidence that the rot has stopped. The latest good news comes from the housing market.

In May 2010, the Greek government went cap in hand to a coalition of international creditors. The 'Economic Adjustment Programme for Greece' (or the 'first bailout') provided €110bn of emergency lending over the subsequent two years. The programme was supposed to end in 2012, by which point the Greek economy would be growing again with its fiscal outlook back under control.

Eight years, five prime ministers, four bank recapitalisations, two additional bailouts and one debt default later, the Greek economy is now finally on the mend. Back in 2010, the IMF anticipated a cumulative drop in nominal GDP of 7% and an unemployment rate peak at just below 15%. They were expecting a recession, but not a calamity.

In reality, we’ve seen a 30% drop in nominal GDP and unemployment rose to just shy of 28%. The economic trauma in Greece has been far bigger than anyone anticipated. Conditions have been so bad, that the central bank has taken to referring to 'The Greek Great Depression'. Writing a couple of years ago Panos (our self-confessed 'Greek ex-commando sunseeker') emphasised the scale of despair across the country.

However, the rot has now stopped. In Hetal’s recent postcard from Greece, she highlighted the substantial improvement in the budgetary position and the restructuring of public sector loans that makes default unlikely. Unless you're an economist, 'sound fiscal dynamics' and 'medium-term debt sustainability' don't typically catch your attention. 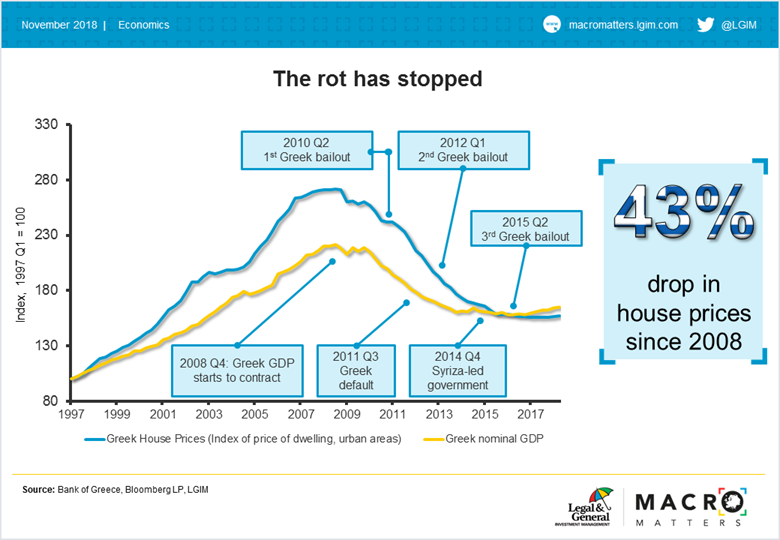 But the latest good news will probably be easier to spot: the housing market is improving. The chart above plots Greek nominal GDP alongside Greek house prices. The former has been gently rising for the last two years, the latter looks like it has finally hit bottom in the last couple of quarters. Students of the Japanese lost decade would emphasise the importance of stability (and hopefully recovery) in asset prices as a precondition for an end to the deflationary funk.

It’s around six years overdue, but Greece would now finally appear to be stepping in the right direction

There is a long way to go for the Greek recovery to be firmly established. The banks still need to work through a backlog of non-performing loans, unemployment is still uncomfortably high, and a new election (due by October 2019) risks another round of political instability.

However, as the old proverb goes, “a journey of a thousand miles begins with a single step”. It’s around six years overdue, but Greece would now finally appear to be stepping in the right direction.