Markets failed to close out the year on a festive note. While 2019 will probably be volatile and difficult, we believe that there should be plenty of opportunities.

Back in early November, we in LGIM's Asset Allocation team cited a number of fundamental and technical reasons for turning more positive on equities tactically, in the expectation of a ‘Santa Rally’ – a lurch higher over the festive period as stocks display seasonal cheer.

Well, there is no way to sugar-coat this: December is now over and it is clear that we called the market wrong. The S&P 500 index, in fact, suffered its worst performance during that month since 1931. 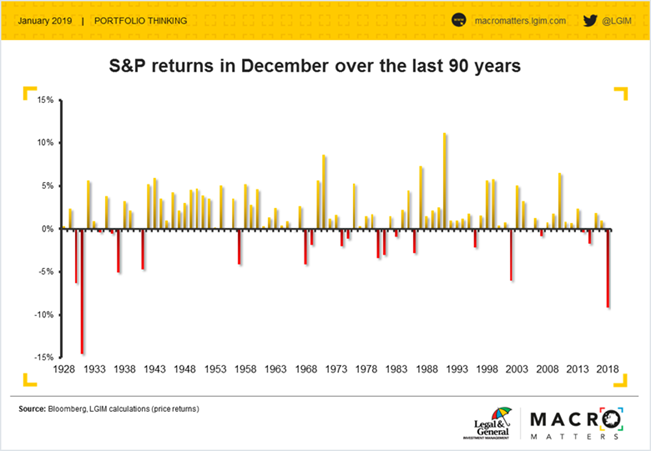 Our portfolios have struggled as a result of this drastic move, generating negative returns over the month, albeit better than those of global equities. This resilience was due to the fact that we spread our investment risk, with multiple diversifying positions at any one time.

For example, within our unconstrained portfolios, we take 25-30 tactical positions as part of a total of about 45 positions, some of which are explicitly designed to manage risk; this helps to safeguard our clients against the worst vagaries of markets.

The anatomy of a selloff

So what actually happened to make the year end on such a dour note? As always, we need to be very humble when it comes to venturing explanations for short-term movements in asset prices. There is a certain degree of idiosyncrasy and randomness in markets.

However, we think a few things happened in December that prompted Santa to put the stock market on his naughty list.

First, investor expectations for economic growth have deteriorated of late, according to a survey by Bank of America Merrill Lynch. This matches our own framework of US recession indicators, which suggests the risk of a downturn over the next 12 months has indeed increased somewhat.

But at the same time, the inflation outlook for consumers has improved markedly, as oil prices have retreated – one point on which we agree with US President Donald Trump, who described the move as a “big tax cut” for the economy. Taking everything into account, we disagree with markets and do not think the growth prospects have materially deteriorated.

Overall, tail risks have not moved too much either, in my view; however, there has been lots of noise and counteracting movements, amid a sense that the Trump administration is becoming even more chaotic than usual:

There are also a number of technical, market-related factors that we believe are important, not least selling by US retail investors. (This might explain the fact that we generally saw markets deteriorate as the trading day wore on, as US retail investors became active during the London afternoon and into the market close, when mutual funds trade to mitigate risks.)

But what does this all mean?

At the risk of sounding like a broken record, the Asset Allocation team's fundamental view has not changed: 2019 will likely be volatile and difficult, but also full of opportunities. Recession risk remains low, even though markets are pricing in recession risk.

We are entering an earnings season that might remind investors that the end of the world is not nigh. And the fact that retail investors – sadly, often the flightiest – appear to be big sellers should give us confidence that, once market positioning has been cleaned up, people will focus again on fundamentals and see the opportunities, rather than just the threats.