The US Senior Loan Officer Survey is signalling low recession risk, but how reliable is this indicator?

As my colleague James Carrick is fond of saying, if there were only one indicator we could take to a desert island to help us with our forecasts, it would be the US Senior Loan Officer (SLO) survey. This asks banks on a quarterly basis about their willingness to lend to the main sectors of the economy. Historically, whenever US banks have tightened their lending standards, this has reliably preceded the onset of US recessions. Surprisingly, the latest reading showed a faster easing of lending conditions. Given this indicator tends to move in relatively smooth cycles, it suggests the probability of recession is low for the next twelve months. 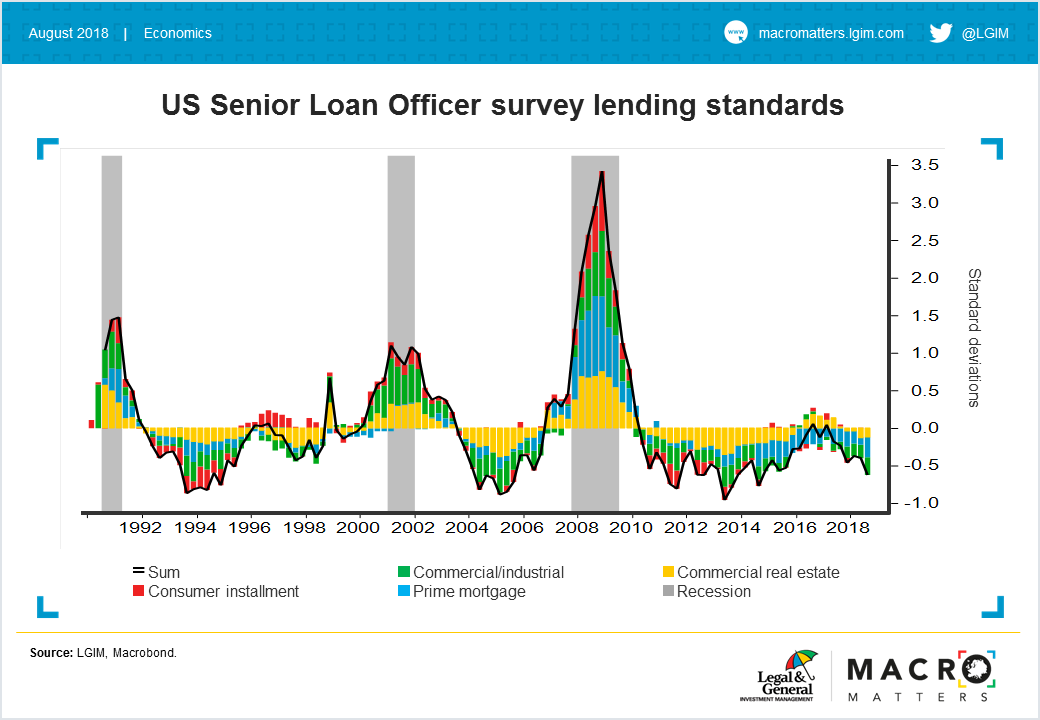 Prior to the financial crisis, the SLO survey was not widely followed (and only had a track record over two economic cycles). The question we are grappling with today is that given its higher profile, could it succumb to a version of Goodhart’s Law? This postulates that any observed statistical regularity will tend to collapse once pressure is placed upon it for control purposes. It is possible the way the survey is filled out today could be influenced by the enhanced regularity scrutiny placed on the banks. There is also the risk that banks are now so well-capitalised, that they will not cause or amplify the early stages of the next downturn and so the indicator could lose its leading properties.

If there were only one indicator we could take to a desert island to help us with our forecasts, it would be the US Senior Loan Officer survey

With the help of one of our Fixed Income team colleagues who previously worked in this area of banking, we have been probing to gain a deeper understanding around how the survey is compiled. The danger with any sentiment or qualitative survey is that firms might not give them the full attention that economists desire. Surveys, at times, can be passed down to junior members of staff to complete! The good news for the SLO is that banks appear to continue to take it seriously. Credit risk teams typically co-ordinate the survey responses, reaching out to the individual credit subject matter experts. In addition, the Chief Credit Risk officer will tend to scrutinise any changes in responses from the previous quarter to ensure consistency.

The bad news is that the responses are largely based off pricing models. The inputs to these models include market and asset prices. This worked well as a leading indicator in the last cycle because house prices fell before financial markets cracked, so the SLO survey anticipated the turn ahead of financial markets. The next cycle is unlikely to be led by house price falls given that US residential investment is still not back to average levels as a share of GDP and mortgage rates are unlikely to reach punishing levels (even as the Fed continues to raise rates). It might the case that only after credit spreads have widened and equities fallen that the SLO survey deteriorates, but that would be too late for our portfolios! 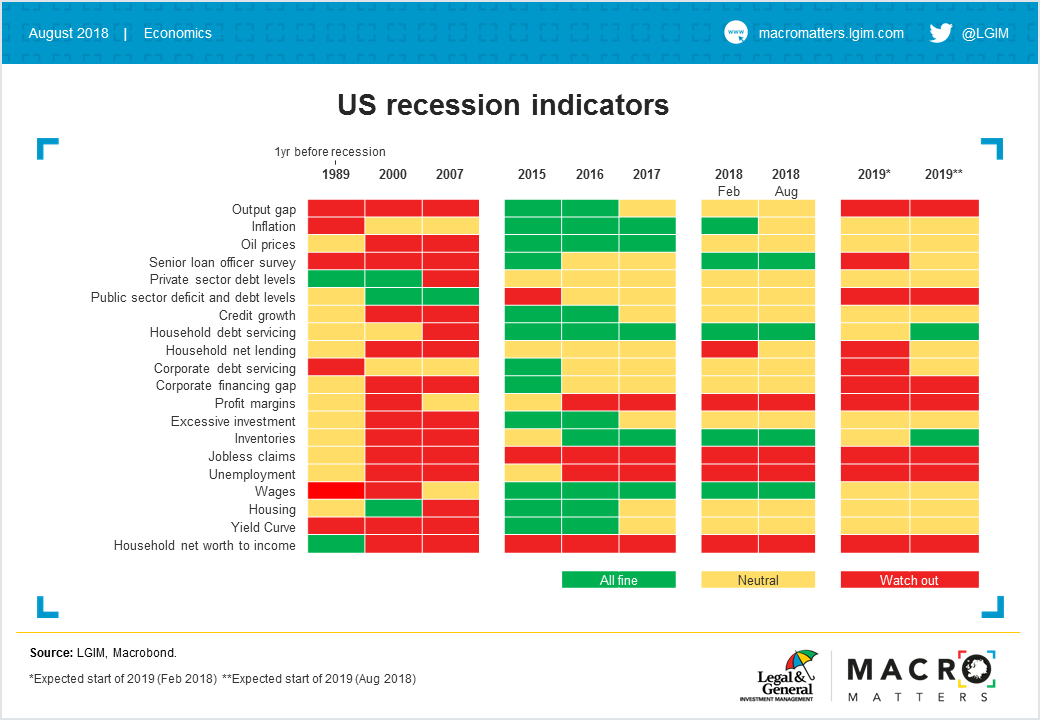 So what can we do instead? We are not going to abandon the SLO, but we have developed a broad range of recession indicators that we track. We last presented these in February and we re-produce the table above with a couple of modifications and an update for current conditions. Two conclusions stand out.

First, the situation has not deteriorated much over the last six months. Inflation is now 'neutral' having risen back to target, but household net lending (essentially the saving rate) is higher than we thought. Second, the start of 2019 is now looking better with five of the twenty indicators expected to be more positive than previously forecast six months ago. This reduces the risk of recession in 2019, in our view.

But this could come at the cost of greater imbalances and overheating. Easy lending conditions today sow the seeds for bad loans in the future. With the fiscal stimulus starting to gain traction, an extended boom could turn to a greater bust in 2020. Though as Emiel has recently discussed, much hinges on whether this path is widely anticipated.