Equities tend to rally into year end, and particularly in years with US midterm elections. While this could easily be a statistical fluke, the Asset Allocation team sees fundamental reasons to buy stocks at this point and is now moving positive on the asset class on a tactical basis.

Although there is no single theory for the 'Santa rally' phenomenon (when stocks tend to rally late in the year), there are plenty of possible ones. These vary from tax considerations, insurance premiums being invested at year end and the positive mood of investors in the festive season, to fund managers becoming increasingly trend-following as their investment horizon is fixed at year end for remuneration reasons.

The effect itself was allegedly first recorded by Yale Hirsch in his Stock Traders' Almanac in 1972. It hasn’t occurred every year, but it has happened in the majority of the years. 76% of the time, we have seen an above-normal positive performance in the final months of the year.

However, this is not a normal year; this is a US midterm election year. Lars Kreckel, the Asset Allocation team's equity strategist and Ben Bennett, LGIM's Head of Investment Strategy and Research have written about the fundamental scenarios on the upcoming midterms. I have just looked at what happens on average.

The table shows that the midterm years have usually been associated with an even more pronounced year-end effect than normal. In a midterm year, the average performance over November and December has been a whopping 4.5% (an additional 0.8% above the standard year end effect). The Santa rally has also been more consistent during mid-term years; in 86% of the midterm years the last two months have delivered an above normal return (note that this is based on fewer observations). 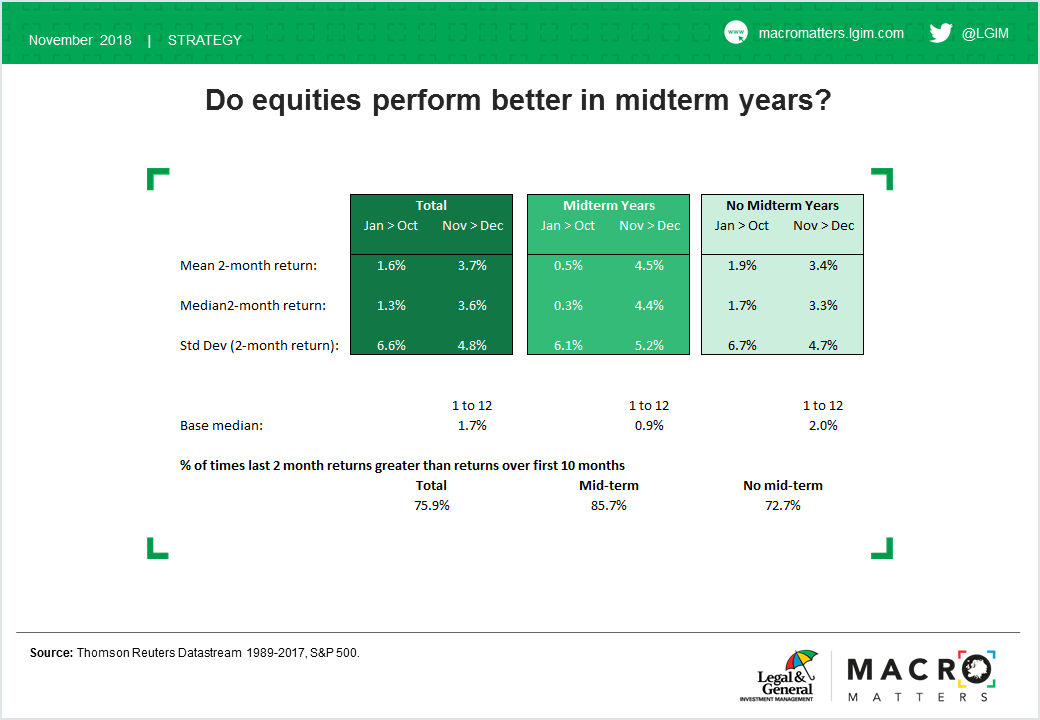 The problem is, however, that these are just numbers, without any fundamental theory. So it could all very well be coincidence, a statistical blip. Something we all enjoy talking about (as the markets need a narrative), but definitely not the way I would encourage people to invest.

However, we believe there are fundamental reasons to get involved with equities markets at this point. In my last blog on the recent market volatility we stated the following “We see the move as most likely a technical sell-off (famous last words) and believe it is probably too early to buy the dip.”

The first part of that statement remains true: We are still struggling to find a convincing macro driver for the market correction. The second one is no longer true: as indicated in that same blog after a 10% correction we would increase our equity exposure as in our view enough of the downside risks are priced in at this level. We reached these levels on Friday 26 October and again on Monday. Hence we have increased our tactical long equities for relevant portfolios. To quote my equity colleague, Gavin Launder; “This bull market is old, yes, but that doesn’t mean it’s done”.

So while our threshold to buy dips has therefore increased as the global economy moves into the latter stages of the economic cycle, a correction of almost 10% seems sufficient to increase our tactical equity allocations.

This has little to do with Santa, nor too much to do with the midterm elections, but everything to do with a fundamental view on the correction and whether there is a tactical opportunity at this point.