What the tech is going on?

We revisit our case for holding technology stocks, and ask whether now is the time to start taking profits.

After years of outperformance, the technology sector has had another amazing run in 2020 so far. This makes it an opportune moment to test our thesis for being long these stocks and to consider taking profits. Is it time to sell the rally or hold on for the ride?

Our fundamental case for technology companies has not changed, but it’s worth revisiting in brief. We believe the tech sector is:

• well positioned to benefit from post-pandemic trends; its strong cash position enables opportunistic investment, while we expect an accelerated shift to online channels and a step change in adoption.

• a likely winner in a retail-investor bubble scenario.

• a beneficiary of a ‘lower for longer’ rates environment.

• better able than most sectors to boost earnings through cost cutting, buybacks or dividends.

• relatively immune to rising US labour costs down the road.

• in a net cash position, so has relatively little direct exposure to the credit cycle, although the venture-capital end of the market would suffer and this could have some spill-over effects.

• at the expensive end of the US sector spectrum, but taking its growth prospects into account makes valuations look more acceptable.

While we believe all of the above still apply, there is always room to reduce or cut a medium-term attractive position for tactical reasons. We have long had two guiding principles for tactically reducing our technology position: excessive valuations and/or excessive bullishness.

Starting with excessive valuations, it’s striking that despite tech’s outperformance, the sector’s relative valuation to the S&P 500 index is the same today as it was in January. This is a big difference from the tech rallies of the late 1990s, which were predominately valuation driven. This may feel counterintuitive, but it can be explained by relative earnings expectations rising in lockstep with relative prices, illustrated by the chart below. So staying long technology requires a belief in a step change in relative earnings, but in principle this does not feel like a big stretch given the accelerated adoption trends that we have already seen. 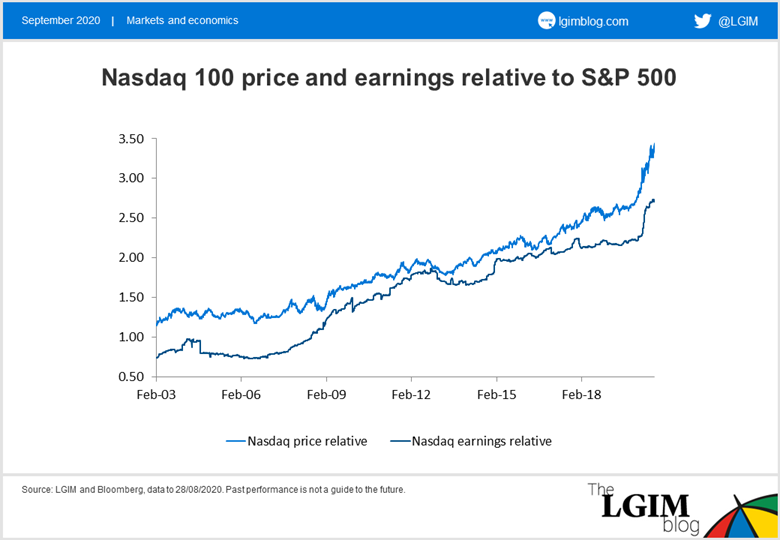 Quantifying this effect from a macro perspective is, however, impossible. Fortunately, a number of things give us confidence that consensus earnings estimates are achievable. First, there has been a significant degree of differentiation in earnings revisions within the technology sector, rather than a blanket upgrade across all tech names. Also, it is encouraging that despite raised analyst expectations, tech companies have continued to beat estimates in recent reporting seasons. Finally, the pattern of beating raised expectations goes back further than just 2020. We find no consistent pattern of analyst expectations for the sector being excessive.

On sentiment, it is impossible to argue that tech is an unpopular sector. But we don’t see signs of excessive bullishness. Tech has been a consensus long in most institutional investor surveys for over a decade, but recent readings have been well within that range. On the increasingly important retail-investor front, Robinhood data show that while there have been flows into tech recently, retail investors have at most reduced their implied underweights to the sector.

But no investment is without risk. For technology, the two things we worry most about are regulatory pressure and a cyclical economic recession. We believe the risk of the latter is relatively low: it would take some time to build the excesses that tend to bring an economic cycle to an end without an external event.

On a potential ‘techlash’, we need to stress that a gradual tightening of regulation is our baseline and is priced in, so we look for the risk of an escalation in regulation. The US election is the next event that matters in this context, but a tech-negative outcome remains a tail risk in our opinion.

Trump 2.0 would, by and large, be a manageable continuation of the past few years. Biden 1.0 is less certain, but Joe Biden has so far shown no particular passion on this topic to suggest tech regulation would be at the top of his priority list. However, personnel is policy when it comes to regulation, so we will be keeping a close eye on potential appointments.

Finally, the fact that tech supremacy plays such a prominent role in the geopolitical contest between China and the US also makes a broad-based escalation in regulation that severely hurts US tech less likely.

So, for the time being, while we closely look for signs of excess in the tech rally, we choose to hold on for the ride.