Too Worried About Tech Regulation?

While I still like tech, there are two 'R's in particular that I worry about: recession and regulation. Focusing on regulation, the risk is real, but is the market too concerned about it?

In the year since the Facebook / Cambridge Analytica scandal hit, a regulation backlash, or 'techlash', has become widely feared by investors in tech stocks. It's fair enough, I share the concerns. But with this being such a consensus view, it is worth pointing out some counterintuitive good news and why the risk of aggressive tech sector regulation could be lower than some bears fear.

Exhibit one is a poll by Georgetown University’s Baker Center, which made for fascinating and somewhat comforting reading. The poll asked 3,000 Americans how much confidence they have in 20 institutions. The result highlighted that Amazon and Google are among the most trusted institutions in the United States; only the military is more trusted. Facebook did less well in the poll. It ranked number 18 out of 20. The only institutions that are less trusted are Facebook’s regulators: political parties and Congress. I have two conclusions from the survey: 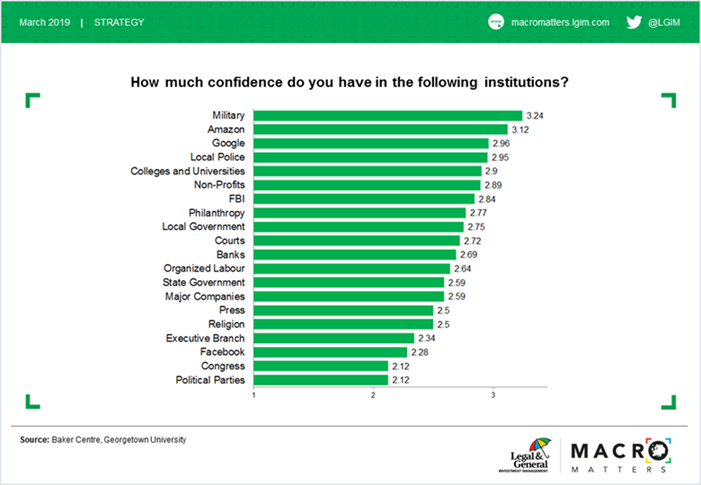 The second perhaps surprising bit of positive news has been the praise the sector received from the European Commission, which has generally taken a relatively hard line with tech regulation. European Commissioner for Justice Věra Jourová said in February that the code of conduct on hate speech, as a voluntary exercise, "works well" and talked about "good results". Nearly three-quarters of content notified as hate speech was removed, compared with only 28% when the process was first launched, and the commission "do not wish to see a removal rate of 100 percent". None of this suggests that tech companies are off the hook, but the report shows that the EU Commission is happy with the results of this light-touch self-regulatory process. The comments sound conciliatory rather than like an institution gearing up for a more aggressive approach.

Finally, it is worth remembering that what seems like a bipartisan chorus of anti-Silicon Valley comments is actually a hugely diverse group with very different views and interests. It is possible that while there is a growing consensus that some form of regulation is necessary, it will be much more difficult to agree on the type of regulation that is required and pass legislation.

None of the above changes our view that escalating regulatory pressures are one of the two greatest risks to our tech position. It does, however, highlight that the case for regulation that hits tech profits is perhaps less clear than some think. For now, I still like tech and we remain long the theme.