The global economy waits for a growth injection from a vaccine

We now expect continued, but much slower, economic growth over the next six months – followed by a renewed pickup after vaccines become widespread next year.

The global economic outlook remains highly uncertain, but we now know the depth of the downturn and speed of the initial recovery, so the range of outcomes is beginning to narrow.

From the start of the crisis, we have focused on three scenarios: the first and most optimistic of these entailed a strong rebound, the second a higher degree of economic scarring, and the third – and least likely – a persistent economic slump.

We now believe it is increasingly likely the world will follow a path somewhere between Scenarios 1 and 2; the chart below depicts the path we deem as the most likely – the median of our forecasts.

After the global economic trough in April, activity rebounded strongly in May and June, but in July and August growth has slowed – especially in areas which have been forced to postpone further re-opening or even re-impose some restrictions. This still means we should witness a huge increase in GDP during the third quarter, but calls into question growth in the fourth quarter.

So what are some of the key assumptions underpinning our central scenario? First, we believe the US Congress will approve another fiscal package and spending for the 2021 fiscal year by the end of September.

Regarding COVID-19, we expect the virus to continue to circulate through the course of the rest of the year. The autumn is likely to be even more challenging as people move back indoors and this could require some additional restrictions, such as indoor restaurant and bar closures.

The school situation is likely to be more complicated. Some countries will continue remote learning, others will try with masks and/or social distancing, and several schools will probably suffer outbreaks and be forced to close again. This could impact labour-force participation as some parents will have to focus on childcare.

As a result of all this, we expect the global recovery to continue, but at a much slower pace and with persistently high unemployment into 2021. There will in our view be some permanent scarring from businesses that were forced to close, which may leave output around 3% below the pre-virus trend by the end of 2021. This would be typical for a recession: while the shock was far greater than normal on this occasion, the policy response has also been on a much larger scale and private-sector balance sheets were in reasonable shape before the virus. These effects should be offsetting.

One great unknown in all this is the timeline for developing and distributing an effective COVID-19 vaccine. The recent news on this front has been positive, with the consensus estimate for widespread and successful vaccines by the second half of next year.

It will nevertheless take time to roll out the vaccines and achieve ‘herd immunity’, so the transition to normality will be gradual, but as social distancing begins to end in 2021 growth should increase again through the middle of the year.

On the other hand, we still think the risks are to the downside given that there is a bigger tail of negative outcomes than the chances of a significant overshoot of the pre-virus baseline growth trends. Any of these could change our median forecast, but for now we continue to believe the most likely path is somewhere between the first two scenarios. 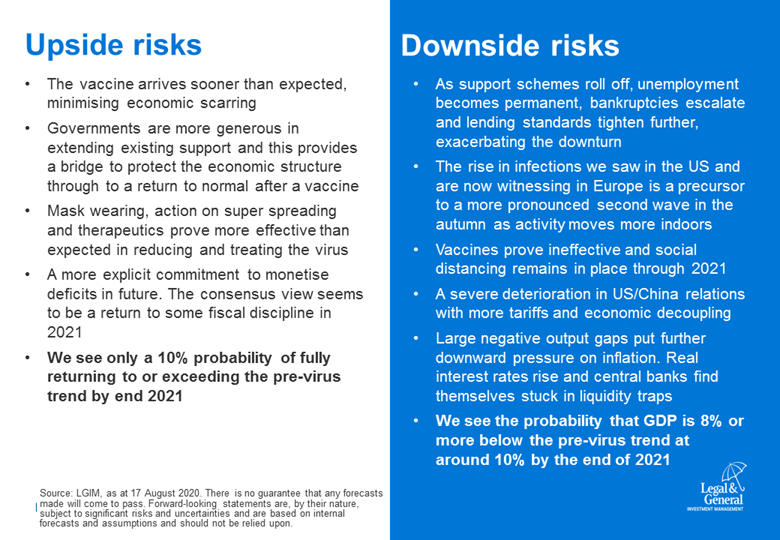