The Asset Allocation team tackles challenges collaboratively, starting with our economists’ analysis, followed by our strategists’ interpretation, and finally the portfolio managers’ view. In this blog, we look at recent movements in bond yields.

Bond yields’ gentle flow higher turned into a flood last week. Nominal yields on 10-year US Treasuries jumped by 0.14% on Thursday alone. The last time we saw moves like this was in late 2016. That episode chimes with today’s market: a change in political direction in the US triggering expectations about fiscal easing, and an equity market that doesn’t entirely know what to make of it. 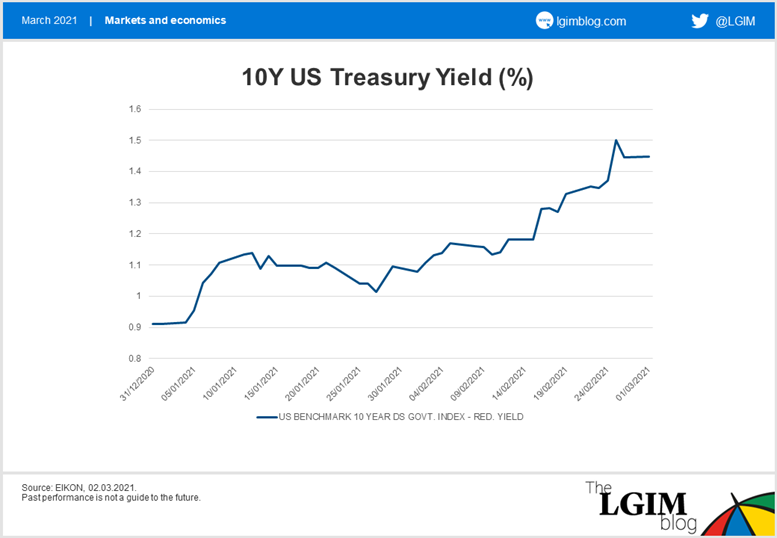 Nominal yields had been pulled higher in the months prior to February by rising inflation expectations, but that was less evident last week. So do recent moves represent growth optimism or is this another ‘taper tantrum’?

Central bankers dislike responding instantly to every market tick, but large and persistent moves will attract attention. The rise in breakeven rates earlier in the year was welcome as it expressed greater confidence in the Federal Reserve (Fed) meeting its targets. Even an increase in real yields from historically low levels is not unwelcome if it reflects an improving medium-term outlook.

However, the Fed is likely to be more concerned by market pricing for short-term interest rates. As yields climbed on Thursday, the market started to flirt with the Fed hiking rates in 2022 alongside almost three more increases in 2023. This is at odds with the central bank’s dot plot, which in December signalled no rate hikes in 2023, according to the median participant.

If the bond rout continues, the Fed’s first step is likely to be repeating the forecast. The labour market is still in a deep hole, inflation is expected to remain low after the temporary increase in the spring, and so there is a long way to go before even ‘thinking about thinking about’ rate hikes.

If this does not work, the Fed could criticise market pricing more explicitly through language like “the recent increase in yields is unwelcome”. If jawboning fails, the Fed could start to intervene. An initial step there would be a maturity extension, to keep longer-term borrowing costs down. The ultimate weapon is more quantitative easing, but this is likely a last resort only to be deployed if financial conditions tighten to an extent that threatens the economic outlook.

Markets are reasonably asking, “Are the inflation dynamics now different? Is this a regime change?” Anyone who claims to know the answer to that question is making things up, but it’s at least a possibility we have to take seriously. Ultimately, we think the answer will be “no”, but it is an environment ripe for overshooting.

We have been positioned for the combination of higher real and nominal yields in recent weeks. Our rationale isn’t too different from the one that you hear repeatedly: accrued savings on household balance sheets, plus fiscal stimulus, plus vaccine rollout.

Last Thursday was the first time that market moves started to feel a little dysfunctional, bringing one of the weakest US Treasury auctions in memory. In its immediate aftermath, we reduced our duration underweight as the prospect of policymaker pushback looms. We’ve already seen that in Europe, with European Central Bank Governing Council members describing it last week as “an unwarranted tightening of bond yields”.

As mentioned, the Fed is now back in play. For some time now, we’ve favoured diversifying rates exposure away from the US given the pending fiscal impulse.

We shouldn’t read directly from rising bond yields into equity valuations. Instead, we should consider the all-important driver, which is usually growth and therefore supportive of equities. Equity sell-offs driven by bond volatility should generally be seen as buying opportunities, in our view, which ties with our positive overall stance on risk in portfolios and a bias to buy the dips.

There was a quick risk-off wobble in equity markets on Thursday, but overall the market held up well, without enough of a dip for us to add yet. It’s also worth noting that one of the risk-management strategies we have in place, defensive currencies, started to kick in following that brief market panic.

With central bankers committed to lower rates, we see the more painful scenario for equities of a lift-off in rates as unlikely in the near term, but that could mean a more compressed cycle further down the line.