US economic expansion: resumed or reset?

The pandemic has helped reset the US economic cycle, but perhaps not as completely as expected. Here, we examine our recession indicators to see how quickly the cycle is progressing.

Recessions typically purge excesses and usher in long periods of expansion. The past four US cycles have lasted over eight years each on average.

In the Asset Allocation team, we have been using a set of recession indicators for several years. The idea is not only to anticipate recessions, but to assess where the US currently lies in its economic cycle. The current phase in the cycle can help with trying to predict future asset-class returns.

Ahead of the COVID-19 crisis, our indicators had stalled for a couple of years in the near-late cycle phase, but were still not flashing a recession warning. Our recession indicators can’t be designed to capture non-economic shocks such as pandemics or war, but we still hope the indicators will prove useful as we navigate going forward.

For now, the US appears to be in the early cycle stage. Last year’s recovery in the second half was rapid, but from a deep hole, and then the economy slowed sharply around the holiday period as virus cases picked up, restrictions increased and support from earlier fiscal stimulus faded.

We use a traffic-light warning system based on quantitative thresholds for indicators which tend to move through the three colours over the cycle. On the latest data, the indicators are mostly green and yellow.

However, based on our forecasts for rapid growth, and aided by the increasing chance that Congress will pass even more stimulus than I had previously anticipated, this could change to mid cycle by year end.

The scale of the rebound will determine how long the next cycle lasts. If we have underestimated economic scarring, it could take many years to recover the lost output. There is also uncertainty around the supply side of the economy. Weaker investment could undermine productivity, but there are probably stronger arguments that the pandemic has forced firms to cut costs and find more efficient ways of working, enhancing productivity. So, we would not expect the labour market to return to full employment, even as GDP recovers to its pre-virus path.

But given the scale of the stimulus, and assuming the positive news on the virus and vaccinations continues, it is possible that growth booms and overshoots in 2022, leading to a rapid deterioration in the recession indicators, and even a move into ‘late cycle’. This scenario is shown in the last column of the table below. 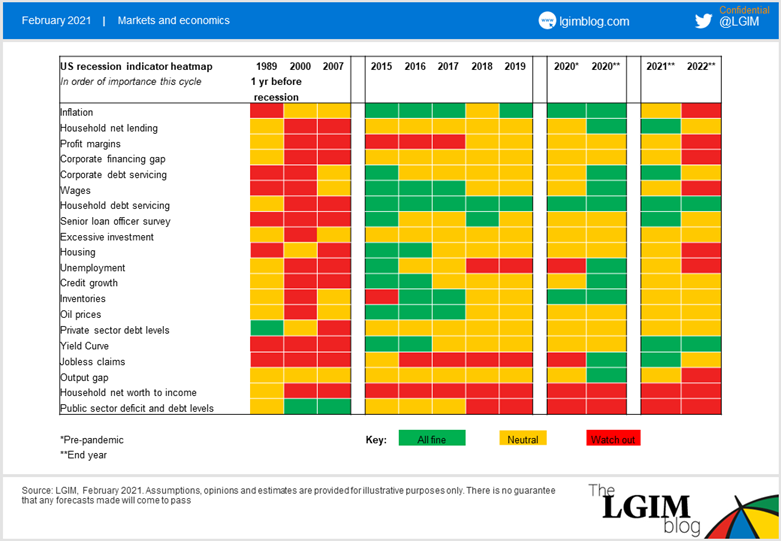 We have also taken this opportunity to reassess which variables are likely to be most important for this cycle. We believe inflation is even more critical now the US Federal Reserve (Fed) is committed under its new framework to not raising interest rates before inflation has returned to 2%. It is on track to moderately exceed 2%. This means the Fed is prepared to take more inflation risks, rather than pre-emptively hike. But by delaying, it might need to slam on the brakes more abruptly.

In the near term, the speed of households running down their excess saving will be crucial in gauging any potential overshoot of the economy.

Next up are the corporate-sector variables, which are likely to be a future source of vulnerability. Housing has become more cyclical again and is threatening to become frothy if interest rates stay low for too long. The Senior Loan Officer survey has become less important as a lead indicator as banks are well capitalised, but tightening lending standards may exacerbate the next downturn. Finally, we continue to believe that debt servicing is more important than debt levels.

For now, the early stage in the cycle is contributing to our overweight equities position, but we are watching in case this cycle proves to be shorter and sharper than we have experienced for a generation.