In our fourth post in this series, we look at the questions that Russia's invasion raises for the global economy. We also outline our views on the outlook for Fed, BoE and ECB policy.

In addition to causing intense human suffering, deepening a geopolitical crisis and disrupting many markets worldwide, the conflict in Ukraine is also affecting a global economy that is still emerging from the shadow of COVID-19.

So in our latest round of economic forecasts, while we make no assumptions around how the war will unfold, we factored in the current status quo – which includes severe sanctions on Russia and elevated energy prices.

Our analysis suggests that the direct impact of the invasion on global growth (outside a deep recession in Russia) is likely to be modest at this stage. But there is now a new avenue of downside risks from potential military escalation and energy-supply disruptions. And just as before the fighting we were more worried than many of our peers about the prospects for inflation, the spike in oil and gas prices has added to our concerns. 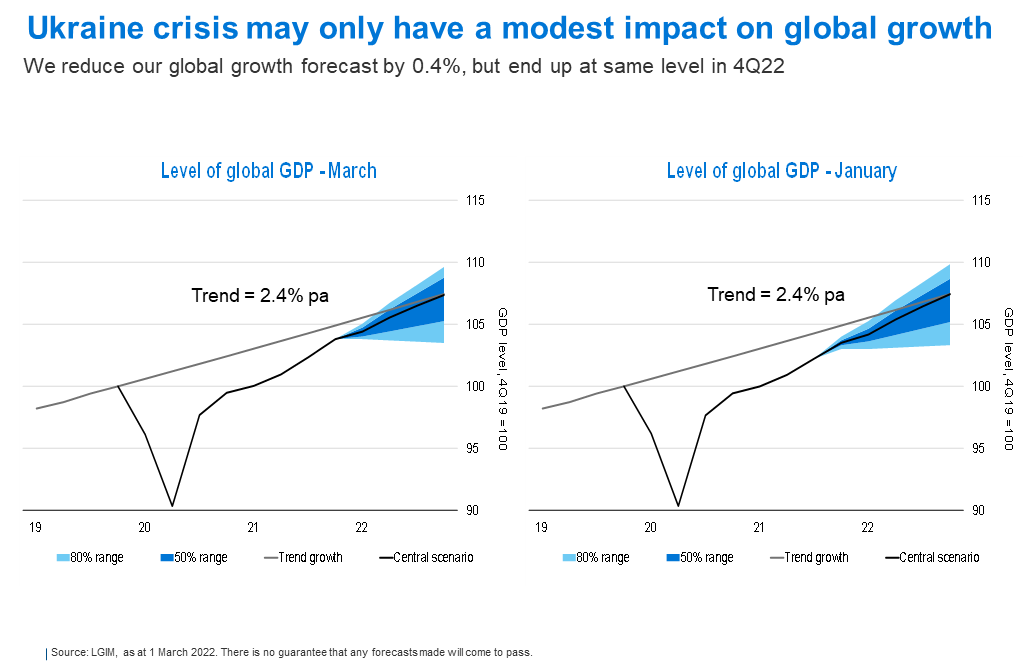 Rather than speculating on the economic impact of extremely fast-moving events, it’s probably more instructive to outline the key macro uncertainties we are facing as a result of the conflict. These include:

Beyond the war, we’re also wrestling with the question of how consumers’ savings and wealth buffer is able to sustain demand, in light of the squeeze from inflation; how higher interest rates might affect long-term growth; and whether supply-chain bottlenecks and wage pressures abate.

What we can say for certain at this point, though, is that the global economy was enjoying good momentum before the conflict. Indeed, growth in the fourth quarter was stronger than expected, while the Omicron wave has continued to fade even more rapidly in developed markets.

As noted above, the main way in which we see the invasion hurting economic output is through higher energy prices – to which Europe is most vulnerable – alongside a modest hit to consumer and business confidence stemming from geopolitical worries.

Unsurprisingly, we have increased our inflation forecasts again (a recurring theme), taking us well above consensus this year, with inflation peaking around 8% in the US and UK and above 6% in the euro area. But if energy prices rise significantly further, stagflationary double-digit increases are possible.

Reflecting this outlook, and the fact the US consumer should be able to withstand the rise in energy prices from the Ukraine crisis thus far, our best estimate around a wide range of possibilities is that the US Federal Reserve raises interest rates at every policy meeting on average until the end of 2023. This would take rates to 4%; we also don’t rule out lumpier 50bps moves.

Elsewhere, we see the Bank of England hiking in March, May, August and November. And we expect the European Central Bank to raise rates once, at the end of the year.

Unless otherwise stated, information is sourced from LGIM analysis as at 2 March 2022.