The UK’s furlough scheme has now ended. There’s still no sign of labour-market stress in Google searches, suggesting limited slack in the post-Brexit UK labour market. We believe this keeps the door open for a rate hike this year if the Bank of England wants to tighten policy pre-emptively to keep inflation expectations in check.

The UK’s furlough scheme was tapered in July and August (with firms paying 10% and 20% of wages, respectively) and was wound up at the end of September. Official data show no deterioration in the labour market during the tapering period. The number of people paid through PAYE (pay as you earn) – which includes furloughed workers – continued to rise through September. Similarly, the number of people claiming unemployment-related benefits continued to fall. 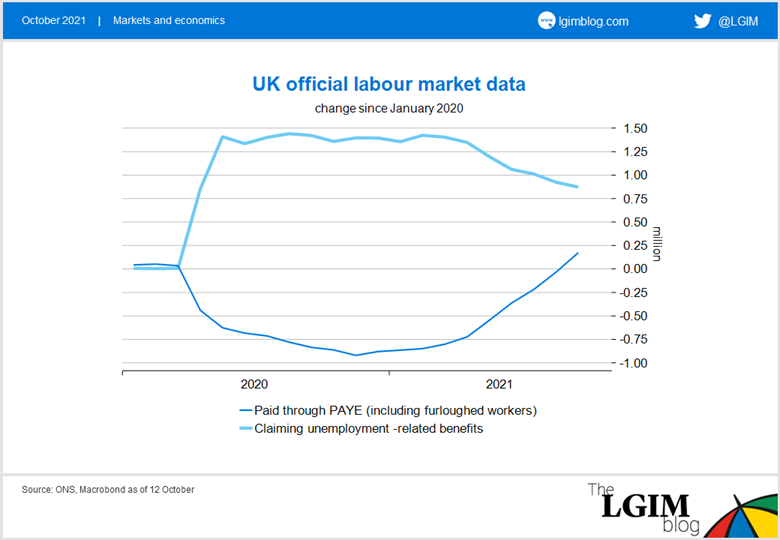 The Office for National Statistics (ONS) estimates 5% of the workforce was still on furlough in mid-September, with a slight majority on full rather than flexible furlough. What has happened to them now? Have they been absorbed back into the workforce or have they been made unemployed?

To our surprise, we’re still not picking up any signs of stress in Google searches for “redundancy”, “unemployment” or “job seeker’s allowance”, in contrast to what happened last year. Firms continue to cite acute labour shortages. What is going on? 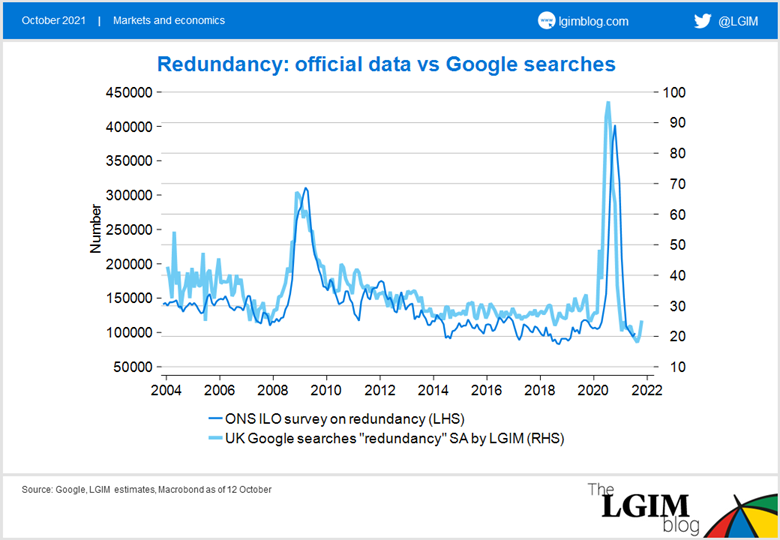 Could the distortion in numbers indicate fraud? HMRC predicted 5-10% of furlough payments would be fraudulent. And surveys cited by a National Audit Office report last autumn suggested 7-34% of employees were asked to work, even though their employer was claiming furlough payments on their behalf. That would keep unemployment low after furlough ends.

Another issue is Brexit: business surveys continue to cite a shortage of European workers as a reason behind recruitment difficulties. National Insurance numbers issued to non-EU workers have returned to pre-COVID levels, but the number issued to EU workers has fallen by 100,000 per quarter – equivalent to 400,000 per year or 1.2% of the labour force. The supply side of the UK labour market has slowed compared with before Brexit. 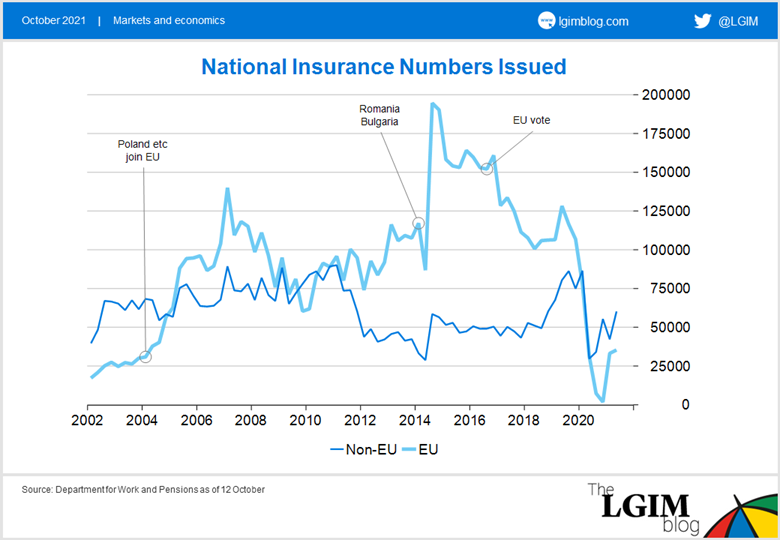 The global energy crisis is yet another blow to the supply side of the UK economy, boosting inflation and reducing activity. A rate hike would add to these headwinds, but the Bank of England (BoE) seems determined to avoid second-round effects from locking in higher inflation via a wage-price spiral. In its September minutes, the BoE suggested it could raise rates this year if post-furlough unemployment remained low.

Damned either way, forthcoming rate decisions look a close call. Wait until next year’s pay round and risk pass-through into prices? Or take pre-emptive action to reinforce credibility but hurt the economy?

The UK’s growth outlook is being dented by supply-side shocks. For us, however, that is not a good enough reason to expect sterling weakness. Short-term interest-rate differentials tend to be the more important drivers of developed-market currencies. With Bank of England rate hikes on the table well ahead of the Federal Reserve, we have reduced our dollar exposure accordingly.