Twin peaks: the law of averages and the zero lower bound

In pricing fixed income securities, a lot hangs on the difference between the mean, median and mode. Markets reflect a probability-weighted average of potential outcomes (i.e. the mean); policymakers typically focus on the single, most likely outcome (i.e. the mode). Thinking carefully about the difference has important implications for how we view interest rate risks.

The range of possible interest rates at some point in the future is a fairly abstract concept. However, we can learn quite a lot from thinking about a more tangible example.

The chart below shows the distribution of heights of members of LGIM’s asset allocation team (or at least, those members who replied to my impromptu survey). The shortest team member comes in at 159cm (5ft 3in for those who prefer imperial measurements). The tallest is 193cm (6ft 4in). 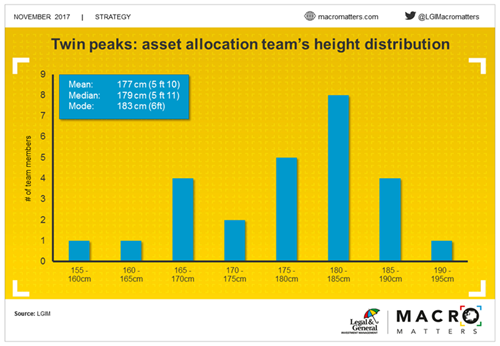 The point of showing this information is to motivate the following thought experiment. “What is your best guess of the height of a randomly selected team member?”

Answering this question is surprisingly difficult even when you know all the above information. There are three perfectly sensible answers:

Thinking about this height distribution is a surprisingly helpful way to think about interest rates. It can often be a headache trying to reconcile the actions of bond traders with the words and outlook of central bankers. Mark Carney’s repeated warnings that interest rates could rise “faster than the market expects” are a case in point.

When the distribution of potential outcomes is twin-peaked, as in the height example above, the two averaging methods will differ by a wide margin

However, their differences can be largely understood by appealing to the same distributional arithmetic. When the Federal Reserve, the Bank of England, or the European Central Bank tells us about their forecasts, they are talking about their modal (i.e. single most likely) outcome. However, market pricing will reflect the probability-weighted average of the full range of possible outcomes (i.e. the mean).

These two numbers will differ when the range of possible outcomes is skewed in one direction. When the distribution of potential outcomes is twin-peaked, as in the height example above, the two averaging methods will differ by a wide margin.

Can we do anything to quantify how big this difference might be? Regular surveys by the New York Fed give us one way to answer this question. Their Primary Dealers’ Survey (sell-side) and Market Participants’ Survey (buy-side) regularly ask a slew of questions about the interest rate outlook.The chart below shows the range of outcomes from the latest surveys. 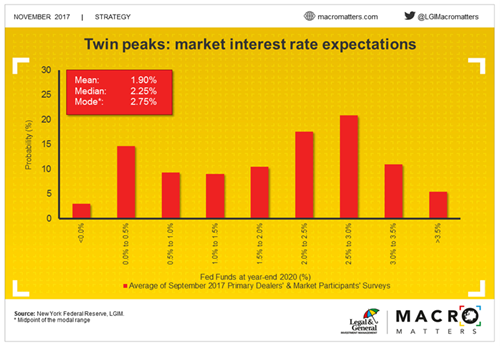 Remind you of anything? The twin-peaked distribution of expected outcomes looks rather like the earlier height distribution. One is clustered around 2.5%-3.0% (i.e. the centre-point of the Federal Reserve’s dot-plot*). The other is clustered around the so-called zero lower bound (0.0%-0.5%). As a result, the gap between the mode (i.e. central bank outlook) and the mean (i.e. market pricing) is a whopping 85 basis points.

Implicitly, the surveys say there is around a 20% chance of a recession over the next couple of years which drives interest rates all the way back to zero (or even below). Is that so outlandish? As I outlined back in January, the historical chance of a recession starting in any given year in any given country is roughly one in six (16%). Over a cumulative three year period, it has been over 40%.

Put in those terms, it doesn’t sound particularly pessimistic to say that there is a 20% chance that US interest rates will be back at zero by 2020. If anything, that probability is surprisingly low.

If we accept this chain of reasoning, then we shouldn’t be too surprised that markets refuse to price-in meaningfully higher interest rates almost irrespective of the mantra from central bankers. When policy was being loosened, “forward guidance” reinforced the message that the interest rates were likely to stay at the zero lower bound. However, now that we’re in a tightening cycle, there is a tension between the gravitational pull of the zero lower bound and the magnet of forward guidance.

As a result, markets will respond to the imminent prospect of action rather than the vague hints and nods offered by forward guidance. Talk is always cheap. But, in the presence of twin peaks, it is even cheaper than usual.

* To really confuse matters, the centrepoint of the Federal Reserve's dotplot is actually the median of the modal forecast provided by each member of the Committee. But, dwelling on that particular issue just seems mean.