Is economic forecasting more like rolling dice or owning a guinea pig?

Historically, the probability of a recession starting in any given year has been independent of the length of the preceding expansion. That makes economic forecasting much more like rolling dice than looking after a guinea pig. Thinking that we are "overdue" a recession because the expansion is "long in the tooth" is an example of the gambler's fallacy and can lead to erroneous investment conclusions.

The typical guinea pig lives for six years. If your child’s guinea pig is any older, then it is worthwhile preparing for an uncomfortable conversation about the circle of life. The old age of the guinea pig is, by itself, a good indicator that its imminent demise has become more likely.

In the last fifty years, the average expansion has lasted six years and the longest expansion stretched for a decade (see the first chart below). Using guinea pig logic, it is very tempting to take the length of the current expansion (7½ years and counting) as an indication of its likely demise. You hear that kind of thinking when economists or market strategists say things like “the economy is overdue a recession” or “the expansion is on borrowed time”. 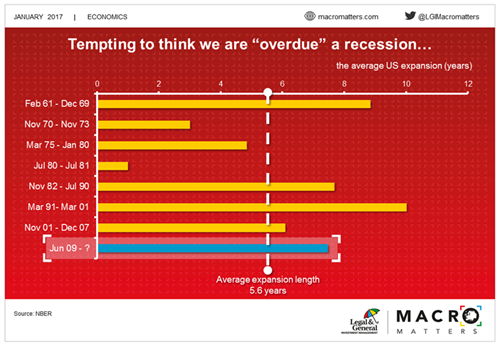 Even if the guinea pig school of thought is correct, it is worth bearing in mind that there are statistical outliers. This is true of both guinea pigs and economic expansions. According to the Guinness Book of World Record’s, the world’s oldest guinea pig (Snowball) lived to the ripe old age of 14 years and 10 months. Outside of the US, there is plenty of evidence of multi-decade expansions. The post-war UK expansion lasted for 22 years from 1952 to 1974; Australia is currently enjoying its 25th year of consecutive growth.

Guinea pigs are admittedly cute, but are they a useful model for thinking about recession risks? What other framework can we think about?

If you roll a dice* on the 1st of January every year, you will (on average) have to wait six years before rolling a six. However, unlike the guinea pig, the probability is totally independent of how long you have been waiting.

(* One of my more pedantic colleagues, who shall remain nameless, pointed out that this should be “a fair six-sided die”).

If the chances of a recession were like rolling dice, then the guinea pig logic would be totally bogus. Thinking that you are overdue a six after a long barren run is an example of the “Gambler’s fallacy” or the “Monte Carlo” fallacy. On August 18th 1913, the roulette wheel at the infamous Monte Carlo casino came up black 26 times in a row. A lot of people lost a lot of money betting that the wheel was “overdue” a red when, in fact, it was no more likely than yet another black.

Guinea pig vs. rolling dice: which is the better model? 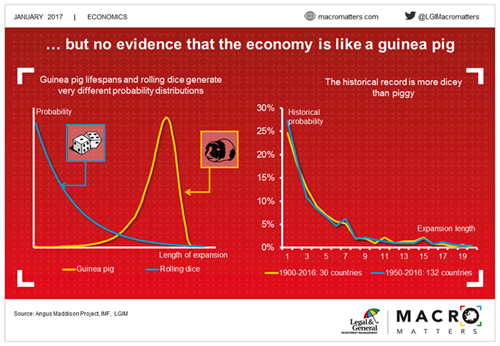 Why does this matter?

There is clear evidence that expansions do not die of old age. That has a couple of important implications.

First, we need to constantly factor in a background recession risk into our thinking about market prices. Another recession could cause a collapse in corporate earnings and a swift return of US interest rates to their lower bound. A sensible estimate of its probability is therefore vital for thinking about “fair value” in both equity and bond markets.

Second, we need to be constantly on the look-out for indicators that warn us that recession risk is rising. Nothing helps predict a six when rolling dice (not even that “lucky shake”), but late cycle economies are typically identified by several clear markers. Tim’s recession risks dashboard is an invaluable tool for keeping track of how they are evolving.