Just as I switch between holding and letting go of my son as he learns to ride his bike, monetary policymakers might 'let go' of ever-looser monetary policy in the coming months as their previous interventions seem to have stabilised the world economy.

Getting the cycle right is the key call for asset allocation investors. Unfortunately, I got a key cycle call wrong.

When my son was young I got him a tricycle. With hindsight, I should have got him a ‘balance bike’ instead.

I thought the key to cycling was pedalling and steering. How wrong I was. It’s all about balance.

Bikes either move forward.... or they crash to the ground

My son’s bike connects to mine via a ‘trailgator’. It turns our bikes into a tandem and allows me to tow him all across London. 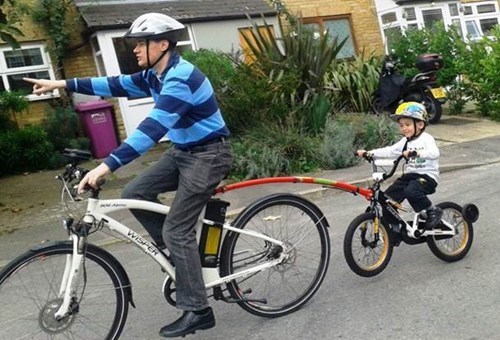 But it means I’ve had to remove his stabilisers. And it turns out he cannot cycle without them as he doesn’t know how to balance!

Bikes either have enough positive momentum to move forward, or they wobble, tilt and gravity inevitably pulls them to crash to the ground.

So as he learns to ride, I have to run behind him bent down, pre-emptively nudging or holding onto his seat to keep him upright.

I see several parallels with the economic cycle and the behaviour of monetary policymakers.

At the start of the year, financial markets were rolling over after the Fed had hiked interest rates and promised to do so four more times in 2016. I warned this had the potential to cause a self-reinforcing downturn given the inter-relationship between tighter credit conditions, weaker economic growth and rising bad loans (“Yellow Card”).

Policymakers reacted and stabilised credit markets... so our lead indicator has improved

Just as I step in to support my son at the first sign of trouble, the ECB and BoJ reacted to the dangers by buying more assets, including corporate bonds, while the Fed kept rates steady.

Credit markets have subsequently stabilised and the flood of money also seems to have improved EM bank lending conditions too (see "Money talks"). 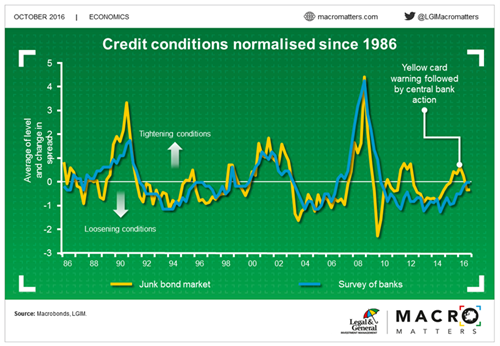 So our lead indicator for US growth has improved. If financial markets remain firm, then the next recession could be pushed out to 2019. 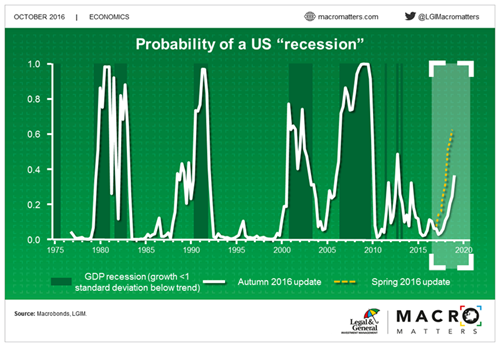 What happens next? Well as the economy stabilises, financial markets might be too complacent about the policy outlook.

Just as I don’t feel comfortable constantly bending down and chasing my son, central banks don’t feel comfortable buying the entire bond market or keeping interest rates at extremely low levels forever. Ultimately, we want our children to grow up and prove they can cope on their own. So maybe central banks will ‘let go’ again soon. The ECB recently disappointed markets by not extending QE and maybe the Fed will disappoint by hiking rates again in December.