An update on the UK's Brexit negotiations

Nine months on from the EU referendum in June last year, and the UK is formally triggering Article 50. So how are the Brexit negotiations shaping up? Will the UK get the deal that it wants or is it going to be more like the Battle of Waterloo?

The name of the game

Prime Minister Theresa May has repeatedly told the country that ‘Brexit means Brexit’. The notification of Article 50 now kicks off the formal process of leaving the EU and the negotiations around this.

While the economy has shown resilience beyond what was expected by most forecasters (including us), huge uncertainty looms over the horizon: what will the UK’s relationship with the rest of the EU look like?

I have a dream

The Prime Minister’s 17 January speech outlined the future relationship with the EU. Key elements included the UK leaving the single market so that it can control migration. The main objective will be to negotiate an ambitious free-trade agreement with the greatest possible access to goods and services markets. The UK hopes to be free to strike trade deals with non-EU countries (which is why it would need to leave the customs union) but will seek a ‘customs agreement’ with the EU; what this would look like is unclear. 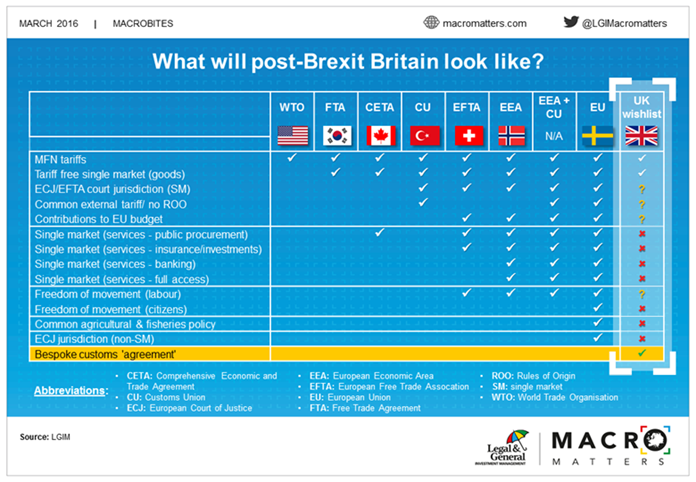 Furthermore, the UK government will seek to stop contributing “huge sums” to the EU budget. There will be no unlimited transitional agreement. Instead, Theresa May wants to reach an agreement within two years, followed by a phased period of implementation to give businesses time to plan and prepare.

Overall, the plan scored some points with markets and European politicians – possibly ‘douze points’ if this were the Eurovision Song Contest?!*. It’s important to remember, however, that this is still a wishlist and Europe has so far largely kept its cards close to its chest. The transition agreement is helpful as it makes a harmful cliff-edge exit less likely, albeit not impossible, as May rather strikingly insisted that “no deal would be better than a bad deal”. The risk of negotiations becoming bitter and acrimonious is there.

While some in Brussels might wish to 'punish' the UK for Brexit to deter others from leaving, it is the heads of state who ultimately make the decision. They will be lobbied by domestic industries set to lose out from trade barriers with the UK. Europe’s trade surplus in goods with the UK is a strong incentive for Europe to do a deal. However, the UK is unlikely to sign up to free trade in goods without a reasonable arrangement on services (where the UK has a surplus).

Financial services will be a key battleground: London is still likely to be Europe’s dominant financial centre, but it is possible that there are some job losses in the distribution of products sold to Europe and less inward foreign direct investment while negotiations are taking place.

In a thinly-veiled threat, May also suggested the UK could slash taxes to attract companies and investors if the UK fails to agree a positive deal with EU. We do not find this very credible for two reasons: the negotiating position of the UK remains relatively weak and corporation tax in the UK is already relatively low.

The timeframe for getting a deal agreed in two years is limited. Any deal has to be approved by all 27 remaining members of the EU – a process that could take several months and eat into the time for finalising the deal itself.

Furthermore, the political calendar in Europe is tightly packed this year, with French and German elections. The Greek saga continues to bubble away under the surface, so there are plenty of things to keep our European neighbours occupied.

Even if it is in nobody’s interest, the risk is that there is simply not enough time to prevent the UK from being thrust onto a World Trade Organisation (WTO) schedule with tariffs and customs checks on goods arriving into the UK.

Another point of contention is likely to be the ‘Brexit bill’ – the costs the UK could incur to leave the EU such as existing commitments to pensions for EU officials, bailout programmes, structural funds and outstanding project commitments. These are estimated to be in the order of £60bn (or 3% of nominal GDP). Spread out over a number of years this would not be too costly for the UK’s public finances, but could provoke Brexit campaigners where it has been about money, money money.

When all is said and done

So far, Brexit has not been so bad for the UK economy. The formal process is yet to commence, but is it likely to cause a material economic downturn? When all is said and done, given that people have accepted the result, and the media has flagged this, we would not expect a change in momentum caused by the start of the formal process in itself.

The main danger is around the nature of the negotiations, and the shifting risks around the UK. One thing is almost certain though: investors and politicians alike will be kept busy assessing the evolving negotiations.

*Ok, I admit to being an ABBA fan…for anyone else with the same guilty pleasure here's ABBA's Waterloo.

Adapted from my more detailed update on the Brexit negotiations, Knowing me, Knowing EU