As the floodwaters recede from Hurricane Harvey and another storm is brewing, we attempt to assess the impact of natural disasters on the US economy.

Hurricane Harvey has been devastating and with the financial losses escalating, it could end up being the second costliest US storm behind Hurricane Katrina in 2005. Our thoughts go out to the people that are impacted by the storm.

Investors analysing the impact of natural disasters have to park empathy and the enormous social cost to one side to judge the economic and market implications. We believe the instinctive reaction that Hurricane Harvey will be bad for growth and could cause the US Federal Reserve to consider delaying policy tightening is probably the wrong conclusion. 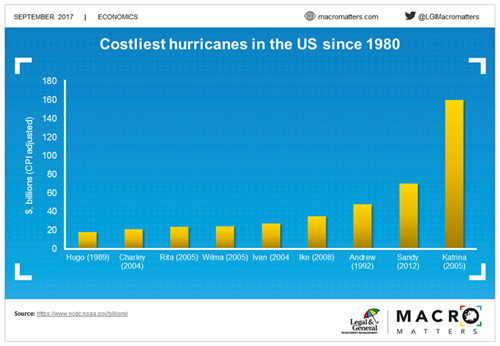 The Houston metropolitan area is the fourth largest in the US with an economy of around $500bn, roughly the size of Poland. There has been a destruction of wealth, especially among the many without insurance, and there will likely be a short-term hit to businesses in the flooded areas. This will impact the national statistics. For example, it seems likely that national August car sales were depressed by around 0.3-0.4mn at an annualised rate. We should also expect a spike in jobless claims and a dip in industrial production due to power outages. The 20 cent rise in national gasoline prices as a result of disruption to refineries could also dampen consumer spending. So overall it is possible that the hurricane takes a few tenths off third quarter US GDP growth.

In terms of future GDP, however, the rebuilding effort will likely add to growth. For example, after hurricane Sandy, car sales rebounded. The bounce-back this time round is likely to be even larger considering around 300-500k vehicles appear to have been damaged. The refineries are already restarting production and gasoline futures have normalised. Federal aid is on the way and the insurance payout will lead to spending from funds which were otherwise idly sitting in reserves. This money could arrive more quickly than historically given that property insurance firms are planning to deploy drones to assess the damage. There will also be private rebuilding efforts on top of the losses covered by insurance. This could lead to strong demand for building materials and construction workers in the area which could add to payrolls later this year (and perhaps even wage pressure).

In terms of future GDP, however, the rebuilding effort will likely add to growth

What about the Fed? Central bankers view natural disasters as both a negative supply and demand shock initially, followed by a positive demand shock as rebuilding commences. This would tend to add to inflationary pressure, all else equal. The main problem they face is that the disaster can distort the economic statistics for a while making it hard to disentangle the impact from actual underlying performance of the economy. This increase in uncertainty might make the Fed more cautious, but they seem set on making a balance sheet shrinking announcement in September with the next live rate decision probably not until December.

Hurricane Harvey could also indirectly impact Washington. The need for Federal aid could bring forward the deadline for resolving the debt ceiling. It also likely lessens the chance of a government shutdown as most politicians would not want to be seen impeding the relief effort. Though some Republicans might vote against any attempt to include Pork barrel among all the bills. A smoother than otherwise resolution of the debt ceiling and government funding might pave the way for some progress on tax reform in the autumn.

As a I write there is a threat of another hurricane (Irma) moving towards the US from the Caribbean. Let’s hope there is not too much damage, but if it does cause disruption, a similar pattern is likely of an initial reduction in activity followed by support as rebuilding takes hold.